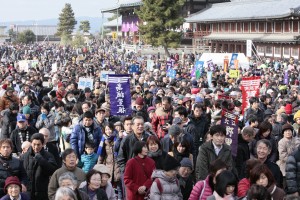 The annual Sechi Festival was held from January 5 to 7 at the Home of the Parent. This is a century-old traditional event that dates back to the 1860, when Oyasama was physically present. Many families and groups of followers from various places around the country returned to Jiba to take part in this event. Blessed with fine weather, the Sechi Festival 2014 attracted a total of 78,715 people, and the Home of the Parent was filled with joy. 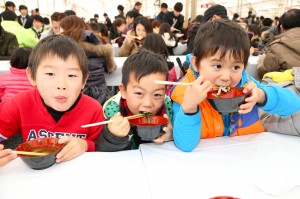 The event started at 10:00 a.m. on each of the three days. Many pilgrims offered their first prayers of the year at the Main Sanctuary. Visitors made their ways to one of six Sechi sites after being treated to a celebratory sip of sake at the entrance gate.

About 40,000 kilograms (44 U.S. tons) of round rice cakes had been offered at the Main Sanctuary during the first three days of the new year, which were later cut into small pieces. People licked their lips over the zoni—roasted rice cakes served with greens in a clear broth—and savored a “joyous family togetherness” special to the Home of the Parent. 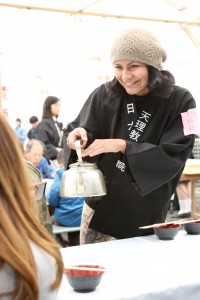 The Sechi Festival was supported by approximately 5,000 hinokishin volunteers—including resident and other staff members of Church Headquarters, head ministers of directly supervised churches, students of Shuyoka (the Spiritual Development Course) and Tenrikyo schools, and members of the Students Sechi Festival Hinokishin Corps. They engaged in various tasks, such as serving the zoni, guiding visitors, and roasting rice cakes.