On October 27, the day after the Autumn Grand Service, the 89th Tenrikyo Young Men’s Association Convention was held in the Inner Courtyard of Tenrikyo Church Headquarters.

The Young Men’s Association is currently promoting the association guidelines “Develop faith and spread the teachings in single-heartedness with God.” In anticipation of the 130th Anniversary of Oyasama, directly supervised chapters, diocese chapters, and overseas chapters have been making proactive efforts to enhance the substance of chapter activities in ordinary times, nurture human resources, and carry out missionary activities under the slogan “Let’s build momentum for salvation.” In the lead-up to this convention, directly supervised chapters made concerted efforts to reach out to their members so that they would have at least one member from each branch chapter attending the convention.

At 10:00 a.m., the Shinbashira, who is also the president of the association, Women’s Association President Harue Nakayama, Mr. Daisuke Nakayama, who had just been named as the successor-designate to the Shinbashira, and other distinguished guests entered the Inner Courtyard to the accompaniment of music provided by Tenri High School Brass Band. The convention began with a moment of worship. After the hoisting of the association flag and the opening declaration, all participants sang the Eight Verses of the Yorozuyo. Then, Association Headquarters Chairman Masanao Nakayama read a progress report on the activities of the previous year.

The Shinbashira then took the podium to deliver his address. He started by mentioning the slogan “Let’s build momentum for salvation,” which the Young Men’s Association is promoting for its pre-anniverary activities in the lead-up to the 130th Anniversary of Oyasama. He also spoke about how each directly supervised chapter is setting a concrete goal for its activities relating to missionary and salvation work and carrying out its chapter activities. He then said: “If pre-anniversary activities are conducted only by those who are adept or willing, we cannot say that we are in accord with Oyasama’s intention. If you build a wall around yourselves, nothing will change. Unless you take a step forward, you gain nothing. Unless you unite your efforts with one another, you can never open a path before you.” He explained that the significance of anniversary-related activities lies in making further progress on the path of single-hearted salvation, which Oyasama hastens.

After briefly reflecting upon the history of the association, he said: “The association’s membership does not require any qualification besides age. What matters most is the earnest desire to seek and spread the teachings.” He went on to say that the most important thing that must be done by members is “to understand their mission, which is to blaze a trail in yet unexplored regions,” and he expressed his desire for the Young Men’s Association to become an organization where its members grow through its activities and unite their minds as one in carrying out those activities. 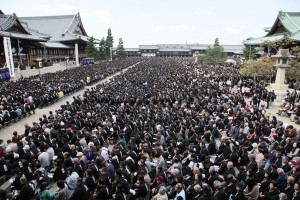 He explained that our forebears pondered deeply and held intensive discussions in their efforts to bring their minds in full accord with Oyasama’s intention, and Oyasama urged them to settle their minds in single-heartedness with God. After saying that the times have changed since then and our way of thinking is vastly different from that of our forebears, he said that we need to exert ever more effort to understand God’s intention embodied in Oyasama’s Divine Model and give thought to how each of us should follow Her example and which part of the Divine Model we should apply to our own lives.

He then told the listeners: “The first thing we should keep in mind is to reflect on God’s providence. When we ponder over the workings of God the Parent and Oyasama, our spirit of single-heartedness with God is always being tested. . . . The characteristic of the Young Men’s Association members is the virtue of being young. It is my wish that you will take advantage of your youthful energy to sprinkle the fragrance of the teachings and help save others with enthusiasm and momentum. Without wavering or worrying too much about the future, I hope you will dedicate your utmost to carrying out your pre-anniversary activities.”
He went on to say that if we miss the season to sow seeds or if we fail to make efforts befitting the season, we will not see any fruit borne. He said, while keeping our sights on the grand goal of world salvation, we need to steadily implement the teachings, starting with whatever we can do. He encouraged the members to take advantage of this seasonable time to help one another settle the spirit of single-heartedness with God, unite their minds in achieving the goal set by their respective directly supervised chapter, and strive to become a driving force for the pre-anniversary activities.

In closing, he requested the members to make a concerted effort to sprinkle the fragrance of the teachings and help save others so that they can build momentum for salvation and encouraged them by saying: “Every step you take according to the time and season will not only bear fruit at the 130th Anniversary of Oyasama, bringing you great joy, but also lay a firm basis for the 100th anniversary of the Young Men’s Association, which will be taking place after the 130th Anniversary of Oyasama. This will eventually lead to the blessing that will last through endless generations.”

Following the president’s address, Sanohara Chapter Chairman Tatsuya Shoji made a pledge on behalf of all association members. To close the convention, all members recited the “Guiding Principles of Arakitoryo” and joined together in singing the “Tenrikyo Young Men’s Association Song” and the “Oyasama 130th Anniversary Song.”

Convention-Eve Festivities
On the eve of the convention, many association members gathered for the “Convention-Eve Festivities” held after the evening service on October 26. On the east and west sides of the South Gate, directly supervised, diocese, and overseas chapters operated 62 booths offering a variety of regional foods. Entertainment was provided on two stages, one on each side of the gate.

The Shinbashira made rounds of the festivity sites, interacting with association members and offering his encouragement to the staff overseeing the festivities.