Tenri Kyoko Gakuen High School Marching Band and Aimachi Branch Church Brass Band won the grand prizes in the high school band division and the community band division respectively at the 37th All Japan Marching Band & Baton Twirling Contest held on December 12 and 13, 2009, in Saitama Prefecture, Japan, thus once again proving themselves to be among the leading performers in Japanese marching band music.

The high school band division is where regional champions contend for the national championship. Tenri Kyoko Gakuen High School Marching Band—winner of the contest in 2006 and 2007—was invited to perform at the 2008 contest as the guest band. In order to remain competitive in the year 2009, the band decided to perform in the contest under the theme “Spirits Undeterred” and put a lot of effort into practicing. Even when the band director and the team captain had to step out for a while due to illness, the remaining members thought of those knots as “tests” God the Parent gave them and kept their spirits undeterred. Through those experiences, the band members became more and more united in the lead-up to the contest.

On the day of the contest, they focused on “bringing joy to the audience,” which is the band’s motto, and received thunderous rounds of applause from the audience. The band won its 14th overall title. “I would like to say thank you to my fellow members who kept the band going while I was out due to illness, to the director and other instructors who have guided us strictly and yet warmly, and to all of those who have supported us,” said Hideki Nishii, a third-year student who served as team captain. 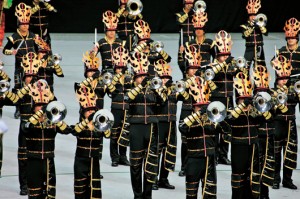 The next day, Aimachi Branch Church Brass Band won its eighth overall title in the community band division at the contest. It has begun to make itself known in the international arena and is scheduled to perform at World Expo 2010 Shanghai China this spring. Band Director Kiyokazu Sekine said, “We would like to thank God the Parent and Oyasama that all of us made it to the stage and were able to come away with the grand prize.”