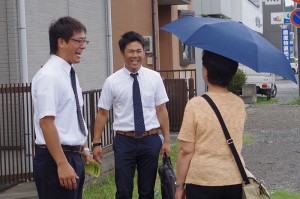 Members of the association’s Oka Chapter sprinkling the fragrance of the teachings to passersby in Hannou, Saitama (Sept. 5). The chapter organized a mission caravan to the region as part of the association’s missionary campaign week, drawing 16 participants. This was also a part of the activities to fulfill the chapter’s resolutions for the “three years, one thousand days” season leading up to the 130th Anniversary of Oyasama. 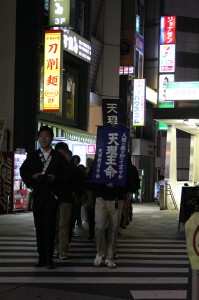 Some 20 members of the association’s Honshiba Chapter spreading the name of God the Parent near the JR Gotanda train station in Tokyo (Sept. 2). This was conducted in the evening, starting at 7:30 p.m., so that members who are working during the daytime could participate. Towards the 130th Anniversary of Oyasama, the chapter has been encouraging its branch chapters to increase efforts to sprinkle the fragrance of the teachings.

Tenrikyo Young Men’s Association ran the Missionary Campaign Week for All Chapters all over the country between September 1 and 8. Towards the 130th Anniversary of Oyasama, the association has been conducting its activities under the slogan “Let’s build momentum for salvation.” In an effort to implement salvation work and increase the number of active members, each chapter of the association made its own resolutions and has been proactively putting them into practice. With September being designated as the month for the Tenrikyo community to emphasize and promote sprinkling the fragrance of the teachings, the association members in local communities—including students and working adults who are Yoboku—took the lead in and committed themselves to spreading the name of God, giving roadside speeches, and doing door-to-door missionary work.
Share this article: