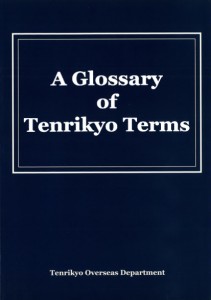 A Glossary of Tenrikyo Terms presents English translations of some 330 articles selected from Kaitei Tenrikyo jiten (Revised Dictionary of Tenrikyo), a Japanese reference work compiled by Tenri University’s Oyasato Institute for the Study of Religion and published in 1997.

The Glossary includes entries ranging from “joyous acceptance” and “path of natural spontaneity” to “sincerity” and “Story of the Divine Record.” Each entry heading is accompanied by its Romanized Japanese original, except for cases where a given term is used untranslated (e.g., Hinokishin, Kagura, Oyasama).

Although this book is organized in dictionary form—that is, its entries are sorted alphabetically—it also contains an index, which includes all entry headings in English and Japanese (Romanized) as well as other words and phrases that the reader may want to look up.

Terms have been selected for inclusion in this volume primarily on the basis of how difficult it is for the non-Japanese reader to understand them. Although Kaitei Tenrikyo jiten gives comprehensive attention to all aspects of Tenrikyo, the Glossary is limited mainly to articles that explain the teachings, mostly leaving out those concerned with the organizational features of Tenrikyo, which have been considered to be beyond the scope of this work.