The International Network for Mutual Help, based in the Overseas Department, held its 14th annual charity bazaar on May 16 on the department’s premises as part of its effort to raise funds for international aid. This network, besides organizing such fundraising activities, collects and provides information on international aid as well as promotes emergency-relief work in cooperation with the department’s overseas mission facilities and various Tenrikyo groups involved with aid efforts. 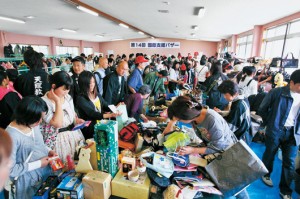 The bazaar offered several thousand items ranging from household items and articles of clothing to furniture and electrical appliances. These items had been donated by many people as a result of the network’s efforts to call for donations through posters, flyers, and the Internet.

A long line of people, including families and students, had formed about three hours before the venue’s doors were opened at 11:00 a.m. This year, the network used as venues not only the Overseas Department’s dining hall and assembly hall, which had been used in previous years as well, but also two large marquees, which were set up in the outdoor space. At the entrance to the venue, staff members distributed leaflets providing information on some of the network’s activities that had been conducted during the past two years.

The items at the bazaar were sold at bargain prices. The prices for household items, for example, ranged from less than one hundred yen to several hundred yen, and furniture and household appliances were sold for between several hundred yen and several thousand yen. Many of the items considered to be an especially good value were gone soon after the venue opened.

In the outdoor space were several food booths offering international specialties, such as churrasco (Brazilian grilled beef) and Nepali curry. In addition, games were organized for children. Supporting the event were some 150 people including staff members of the Boys and Girls Association Headquarters and the Overseas Department as well as students of Tenri University. During the event, Tenri Elementary School’s baton twirling team, called “Smile Grapes,” gave a lively dance performance, warming up the atmosphere of the venue.

The proceeds from the bazaar, amounting to some 510,000 yen, will be used for future international aid efforts.