On June 5 and 6, Tenrikyo Women’s Association held the Seminar for Young Women Leaders at Moya 12. A total of 66 participants from directly supervised chapters and diocese chapters deepened their faith through lectures and group discussions.

Young women leaders have only a few opportunities to meet and interact with their counterparts from other chapters. This seminar is designed to facilitate and enhance interaction among young women leaders during their stay in Jiba so that they can cultivate their own faith and heighten their awareness of their role as young women leaders. 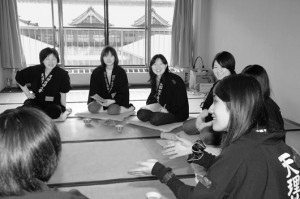 This year, the seminar is being organized on three occasions with a limited number of participants for each seminar in order to enhance the interaction among the participants. This was the first of the three seminars.

On day one of the seminar, Women’s Association President Harue Nakayama took the podium and addressed the participants. After thanking them for their efforts in various activities leading up to the association’s 100th Anniversary Convention, which was held in April, she spoke about the Shinbashira’s address at the convention. She said: “Commemorating the 100th anniversary means that the association is starting anew this year and setting out on a new chapter of its journey. . . . In the next 100 years, our association must achieve a higher level of spiritual growth than in the last 100 years.” She then spoke about the day of origin of the association and the attributes and roles given to women and told the participants, “In order to fulfill our role of nurturing others with a warm heart, I would like you to inquire into the teachings and cultivate strong faith while you are young.” After explaining this year’s guidelines for association activities and how to conduct young women’s activities, President Nakayama concluded her address by saying, “I would like you to take joy in being entrusted with your important role as a young women leader and promote your activities by working closely with all your members so that you can take vigorous steps in the first year of the association’s new journey.”

Next, Committee Member Hiroko Kasai spoke about young women’s activities. This was followed by a lecture by Amaura Chapter Chairwoman Emiko Kinoshita, which was entitled “The First Step in Sprinkling the Fragrance.” On the second day, Furusato Chapter Chairwoman Masako Yamada gave a lecture entitled “Implementing the Teachings in Our Daily Life.”

During the seminar, the participants were divided into seven groups and engaged in group discussions. On the first day, the participants were given a common theme, “My Own Faith,” and shared the day of origin of their family’s faith and their implementation of the teachings in the course of their daily life. On the second day, they discussed different ways of sprinkling the fragrance on their friends and explored different ideas on how to approach the young women who attended this year’s commemorative convention and get them involved in young women’s activities.