On March 12, the installation service for the 15th bishop of the Mission Headquarters in South Korea, Honbu-in Tokuo Hamada, was conducted in the presence of the Shinbashira and his wife, Mrs. Harue Nakayama. The service drew approximately 1,800 followers from across the country.

At 10:00 a.m., the Shinbashira and Mrs. Nakayama made their way to the sanctuary of the mission headquarters dressed in kyofuku robes. In the service prayer, which Bishop Hamada delivered in Korean, he said: “Since this mission headquarters was established, more than 100 years have passed and there now have been 15 bishops. During all these years, despite going through many difficulties, our predecessors have maintained their single-heartedness with God and continued their steps devoted to single-hearted salvation while firmly believing this path to be the path of universal salvation and bearing Oyasama’s Divine Model in mind. As a result, they have been blessed with the present state of the path in South Korea. Having been appointed as the bishop, I am determined to keep the predecessors’ truth of sincerity in mind and to discuss things thoroughly with fellow followers before undertaking anything. Bearing Oyasama’s Divine Model in mind, I will strive to respond to God’s intention.” 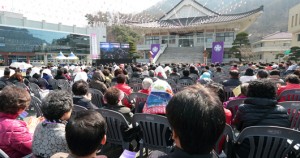 The Shinbashira then took the lectern to deliver his address. He began by referring to the two roles of a mission headquarters as a training center for single-hearted salvation and as a core of care and guidance. He said that it is important for people who live in the same region and have the same faith to help, discuss things with, and encourage one another to achieve unity of mind that will allow them to be blessed with the flourishing of the path in the region as well as the spiritual growth of each and every follower. The Shinbashira then emphasized, “Now is the season leading up to the 130th Anniversary of Oyasama, in which all the followers of the path must work together in unity of mind.” Explaining that the significance of observing an anniversary of Oyasama is for Yoboku to maintain full awareness of their mission as Oyasama’s instruments and to respond to Her boundless parental love, he encouraged the congregation to strive to make further progress on the path of single-hearted salvation.

The Shinbashira also referred to sprinkling the fragrance of the teachings and engaging in salvation work as acts of spreading the intention of God the Parent and making repayment for God’s blessings. He urged his listeners to keep their mind focused on the salvation of others every day so that they can listen carefully to what is on the minds of people who are suffering from illnesses or other problems, tell those people that there is a way to be saved, and administer the Sazuke to them. Moreover, the Shinbashira said: “True happiness does not depend upon material wealth or outward circumstances. The foundation of the Joyous Life is to understand the preciousness and wonderfulness of ‘a thing lent, a thing borrowed,’” referring to the human body, which is on loan from God. He then asked the congregation to connect their own minds with God the Parent and Oyasama and strive to follow Oyasam’s Divine Model in a spirit of simple openness.

Reflecting on the purpose of announcing Instruction Three, the Shinbashira said in closing the address, “I hope your sincerity will lead to the blessings of having buds sprout from knots, thereby enabling the path in South Korea to continue to flourish ever more joyously.” 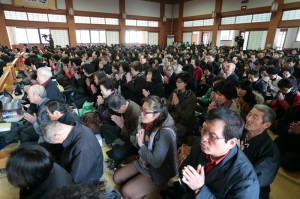 Next, the seated service was performed with the Shinbashira as the core, followed by the dance with hand movements. The worship hall was filled with the spirited voices of followers singing the Mikagura-uta in Korean. Following the service, Bishop Hamada thanked the Shinbashira and Mrs. Nakayama and said to the congregation, “Let’s walk the path of spiritual growth together hand in hand in unity so as to respond to the intention of God the Parent and Oyasama as we work toward the Joyous Life World during the lead-up to the 130th Anniversary of Oyasama.”