Graduation ceremonies for high schools in the Home of the Parent were conducted on February 22 and 23 in the presence of the Shinbashira. Bearing in mind the words of the Shinbashira and with their hearts filled with hopes and dreams, a total of 739 graduates embarked on their respective careers—including going on to higher education, finding employment, and devoting themselves to the work of the path.

On the morning of February 22, Tenri High School’s day course held its 65th graduation ceremony in the school’s multipurpose gymnasium. The ceremony honoring the 408 graduates (219 boys and 189 girls) was attended by their parents, teachers, and underclassmen.

Principal Shigehiko Iburi presented the graduates’ diplomas to class representatives and then delivered a farewell address. He said: “My hope is that you keep reflecting critically on yourself and continue to make steadfast efforts to grow. I would also like you to embrace unshakable faith that can support you.”

The Shinbashira then took the podium to address the graduates. Noting that the “three years, one thousand days” season leading up to the 130th Anniversary of Oyasama had begun, he explained: “An anniversary of Oyasama is a season for us to advance our spiritual growth. You are graduating at this crucial stage of the path.” He also encouraged the graduates, all of whom had become Yoboku during the previous month, by saying: “Your role as Yoboku will remain unchanged throughout your lives no matter what careers you may pursue. . . . The important thing is to continue to improve yourself so that you can grow spiritually into the sort of Yoboku who are easy for Oyasama to use as Her instruments.”

Later, an underclassman delivered a farewell message to the graduates, and a representative of the graduating class expressed appreciation to the many people who had helped them over the years they had spent at the school. Perfect attendance awards were presented not only to those who had never been absent during their three years of high school but also to those who had never missed a single day of school throughout their 12 years of primary and secondary education.

On the evening of the same day, Tenri High School’s evening course conducted its 65th graduation ceremony in the school’s multipurpose gymnasium, honoring the 105 graduates (52 boys and 53 girls).

Principal Shigehiko Iburi admired the graduates, saying: “You have completed the four years based on God’s ultimate teachings to accumulate virtue. During this season leading up to the 130th Anniversary of Oyasama, I hope that all of you will go out into the world with a sense of pride and awareness of being a graduate of Tenri High School’s evening course.”

The Shinbashira also began his address by expressing admiration for the graduates, who had spent four years working at Tenrikyo offices and facilities in the daytime while attending classes in the evening. Referring to the teaching “Buds sprout from knots,” he reminded the members of the graduating class that they are on a threshold of life. He then explained: “Knots are junctures where buds can sprout, but they are also junctures where buds can break off. I would like you to make buds sprout from this knot by making use of what you have learned and experienced at this school.” 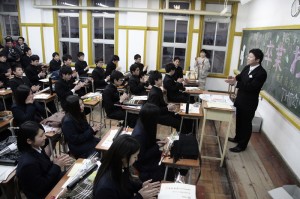 Following the ceremony, the graduates attended their final homeroom class before proceeding to the Main Sanctuary to perform a thanksgiving service.

The next day, February 23, Tenri Kyoko Gakuen High School held its 8th graduation ceremony in the school’s Auditorium 2. The 226 graduates (110 boys and 116 girls) left the school to begin new lives.

In the ceremony, Principal Satoshi Nakamura spoke on the importance of administering the Sazuke to as many people as possible. He said to the graduates: “I would like you to take pride in being a graduate of Tenri Kyoko Gakuen High School. My hope is that you will take an active role as young Yoboku at the forefront of the activities leading up to the 130th Anniversary of Oyasama.” 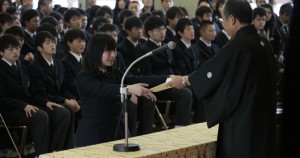 The Shinbashira then delivered an address, in which he pointed out the strong connection between the school and Tenri Seminary, saying, “This school not only provides high school education but also aims to help its students cultivate the spirit of single-heartedness with God through following the teachings and the Divine Model of Oyasama.” He went on to say, “I would like you to proactively seek the path and put the teachings into practice while learning many things in your future careers.”

Later, the graduates and others sang “O-uta 7: The Seeds of Single-Hearted Devotion” together. After the ceremony, the members of the graduating class had a group photo session with the Shinbashira and other guests.