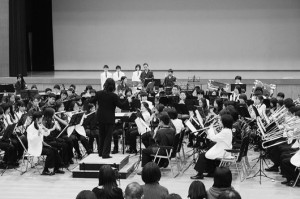 On March 16, the day the Kaimuki band arrived in Tenri, students from both schools met at Tenri University’s Gymnasium 1. After warming up through playing games, they took part in a joint rehearsal, in which they played three pieces including “Tokada,” a ukulele-accompanied piece composed by a musician living in Hawaii. Serving as conductor, Mrs. Ochi-Onishi gave the students instructions, which were translated into Japanese by staff members of the Overseas Department.

The joint concert held on the afternoon of March 17 attracted a large audience including parents of the students in the band. The concert started off with Tenri Junior High School Brass Band’s performance of three pieces, one of which was a dance-accompanied piece, “Copacabana.” Next, Kaimuki Middle School Band performed a set of four pieces, including “I’ll Remember You”—a well-known Hawaiian song. During some of the performances, staff members from the Overseas Department danced the hula while wearing native Hawaiian dresses. In the joint performance that followed, the two bands played a couple of pieces including “Tokada,” drawing warm applause from the audience.

“I believe that my students learned various things from the way Tenri Junior High School’s students were working hard during the practice for the concert,” says Mrs. Ochi-Onishi. “I am hoping to further deepen the relationship between the two schools.”