Tenrikyo marked the 212th birthday of the everliving Oyasama, “our beloved Parent,” on April 18 at its headquarters in Tenri, Japan, by performing the Oyasama Birth Celebration Service and holding a music event called “Joyous Chorus,” which followed the Service. The occasion drew large numbers of followers—including many from overseas—to the Home of the Parent. Oyasama, the Foundress of Tenrikyo, is seen as guiding all humankind to the realization of the Joyous Life, which Tenrikyo teaches is the purpose for which humankind was created. 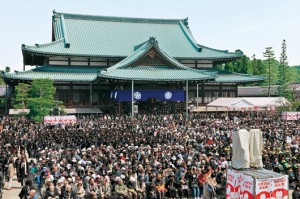 The Service, led by the Shinbashira, the leader of Tenrikyo, began shortly after 10:00 a.m., when, accompanied by the other Service performers, he arrived in the Main Sanctuary after paying respects at the Foundress’ Sanctuary and the Memorial Hall. He first ascended the dais to deliver the Service prayer to God on behalf of all followers. He stated: “Out of Your deep parental love manifested in the Ofudesaki verse ‘The reason Tsukihi began human beings was the desire to see you lead a joyous life,’ You God the Parent became openly revealed in this world through Oyasama as the Shrine, thoroughly taught the truth of everything including the truth of human creation, and showed us the trustworthy path to the Joyous Life through Oyasama’s 50-year Divine Model. With gratitude for Your blessings and with the joy of faith in our hearts, we are committed to working on our spiritual growth each day.

“Today is the auspicious day of Oyasama’s birthday. . . . From now, therefore, we Service performers will conduct the Oyasama Birth Celebration Service. . . . We Service performers as well as church head ministers and other Yoboku, with renewed resolve on this day, are taking to heart Oyasama’s precious 50-year path devoted to saving people. Being grateful for the boundless parental love with which She continues to take the lead in the task of world salvation and to give us blessings, we are determined to strive to contribute to the construction of the Joyous Life World with conviction and passion.”

Following this, the Kagura Service, which Oya­sama taught as the path to universal salvation, was performed. A choreographic representation of God’s creation of humankind and the world, the Service embodies the divine intention to help humans reconstruct the world as that of joyousness, the world as God originally intended it.

The Dance with Hand Movements was followed by a sermon delivered by Honbu-in Tadakazu Yamada. After summarizing the life of Oyasama, he said that Oyasama devoted huge efforts to the “vertical mission”—whereby She imparted insights into finding joy through Her path to Her own children—in addition to the “horizontal mission,” referring to conveying the teachings to others. “Her Divine Model places equal importance on the vertical mission and the horizontal mission as though these are the two wheels of a cart,” he said. “Rather, from a chronological point of view, we can say that Her Divine Model started with transmitting the joy of faith to Her own family members. . . . It is actually this first half of the Divine Model that contains basic examples of the vertical mission. There were many days when the family lived on water and Japanese pickles alone. Villagers and monks derided Oyasama and made protests and threats against Her. During all that period, Shuji, Oyasama’s son, and Kokan, Her youngest daughter, underwent the hardships right by Her side while encouraging each other. It is almost impossible to imagine their feelings. Just thinking about it overwhelms me with a flood of emotion. All those years, they totally dedicated themselves to Oyasama and even conveyed the teachings to other people. Where in the world did their firm conviction come from? It was nurtured in them by Oyasama. It was the result of Her sincere efforts in the vertical mission.” 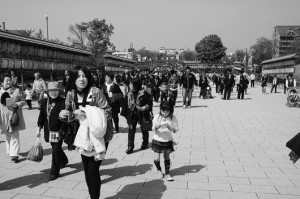 Rev. Yamada also stressed that the importance and relevance of following Her Divine Model does not diminish as one ages, given that Oyasama was fully engaged in Her work throughout the 50 years She spent as the Shrine of God. She even underwent the hardship of arrest and imprisonment in the cause of single-hearted salvation when She was in Her 80s. Honbu-in Yamada said he is also in his 80s now.

In closing, he made a reference to the next day’s 100th anniversary convention of Tenrikyo Women’s Association and said: “I would like to extend my congratulations to the association. Oyasama was a woman. For those of you who are women of the path, I sincerely pray that you take advantage of this season to make a new start with pride and a sense of mission as the foundation of the path.”

Following the sermon, the Service performers assembled in the Foundress’ Sanctuary, where the Shinbashira read a prayer to the everliving Oyasama. “Oyasama, You spent 50 long years as the Shrine of Tsukihi, conveying the intention of God of Origin, God in Truth, through Your spoken and written words,” he said. “As the Parent of the Divine Model, moreover, You cheerfully and spiritedly went through a path filled with hardships, demonstrating through Your own example the path that leads to the Joyous Life. Out of deep parental love, You have patiently guided us, Your children, along the path of spiritual growth. Moreover, even after You opened the portals of the Shrine to level the ground throughout the world, You have been continuing to work for the salvation of humankind and provide us with boundless blessings by virtue of Your eternal life. We are truly grateful for Your infinite parental love. We would like to express our gratitude to You, as we celebrate Your birthday on this auspicious day. Thank You very much, Oyasama. We are all determined to deepen our joy of being allowed to serve as Your instruments. We will follow the path of the Divine Model straightforwardly so that we can draw closer to Your mind. Moreover, we are resolved to devote ourselves to single-hearted salvation in bright and high spirits.”

The “Joyous Chorus” then took place in the Inner Courtyard, where an orchestra comprising musicians from Tenri High School and other Tenrikyo schools as well as Tenrikyo Institute of Music accompanied thousands of followers as they sang a number of songs together to celebrate the occasion, including “Happy Birthday, Oyasama” and “Oya­sama’s Birthday Celebration Song.”