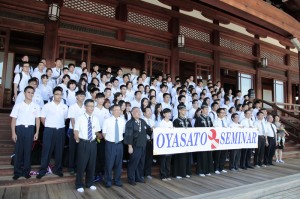 The 2012 Oyasato Seminar began on July 10 with the Spanish, Portuguese, and Chinese courses, as well as English Courses I and III. Launched in 1984, the seminar aims to nurture mainly high-school-aged participants who are to shoulder the task of the overseas mission. This year’s seminar attracted 79 students—including 12 in English Course I (counselors: Yoko Sasaki and Michael Inouye) and 10 in English Course III (counselors: Nicole Saito and Steven Yukimoto)—from 11 countries and regions: Australia, Brazil, Canada, Colombia, Hawaii, Hong Kong, Mexico, Paraguay, Taiwan, Uganda, and the U.S. mainland.

At the opening ceremony, Overseas Department Head Yoichiro Miyamori greeted the participants by saying: “The place all of you have returned to is the original place of human creation. In other words, it is the place where the very first miracle took place. While you are here in the Home of the Parent, I would like you to feel and appreciate that this world is filled with miraculous blessings, which is something that we tend to overlook in our daily life.” After the ceremony, participants and staff members conducted a prayer service in the South Worship Hall.

Students in English Course I and the Spanish, Portuguese, and Chinese courses spent the first several days attending classes covering the basic teachings and practice sessions for the dance and the musical instruments for the service. On the 16th, they crossed the Jusan Pass—located near the border of Osaka and Nara Prefectures—and walked back to Jiba. 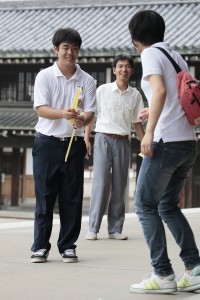 In the meantime, English Course III students had some unique activities focusing on the implementation of the teachings. One of them was to spend a few days with members of the Precincts Section of Church Headquarters standing guard at and around the Main Sanctuary on 24-hour shifts and doing other hinokishin activities in the Sanctuary precincts on a day shift. An American student, Michael Takemoto, 17, had returned to Jiba for the first time last year to attend Course I. He said: “Last year, I got sick in an environment I wasn’t used to. But my fellow course mates, who I had just met, prayed for me. This year, when I was standing guard, staff members of the Precincts Section gave me advice, and followers who came to worship gave me words of encouragement. I was able to feel people’s warm and kind hearts many times. With gratitude for those people’s sincerity, I want to keep working for God in high spirits.”

During the second half of the seminar, the five courses went on a mission caravan separately to Aichi, Ishikawa, Okayama, Hiroshima, and Hyogo Prefectures to engage in missionary work with local missionaries.

On July 19, in front of JR Okayama Station, students of the Spanish Course gave roadside speeches, in which they explained the teachings or shared their faith experiences in their own language. They also spread the name of God by singing the Eight Verses of the Yorozuyo while walking down the 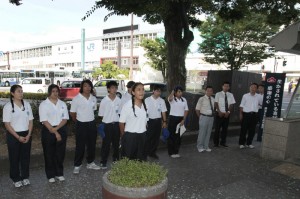 streets. A 17-year-old Colombian student, Andrea Payán, became interested in the teachings three years ago when she started to attend the Japanese class held at Tenrikyo Mission Center in Colombia. She said with her eyes shining: “Though I was a bit nervous during the first missionary work experience in my life, I did my best. . . . The seminar has enabled me to make Tenrikyo friends in various parts of the world. Above all, by having a face-to-face relationship with God the Parent and Oyasama, I was able to once again take a closer look at my own heart. Once I get home, I want to show people around me how spirited my heart became at Jiba.”

The Chinese and two English courses ended their programs on July 25, while the Spanish and Portuguese courses finished on the 27th. The Korean Course was held between August 5 and 17 with 13 participants.