From January 4 to 8, the fifth Students Training Seminar was held at the Mission Headquarters in Brazil, attracting a record 231 participants—including high school and college students—between 15 and 20 years of age. The Students Advisory Committee in Brazil, having been established five years ago, launched the seminar in the following year as a Brazilian adaptation of the Students Training Course held in Jiba. In the hope of having as many students attend the seminar as possible, the committee also began to hold the seminar two years ago at Nordeste Hoyo Church—located in Recife City in the state of Pernambuco—which is 2,200 kilometers (1,375 mi.) away from the mission headquarters, located in Bauru City in the state of São Paulo. 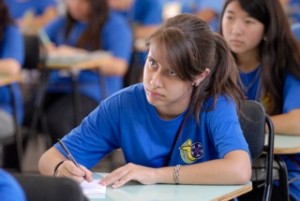 The event was supported by 76 staff members, including committee members and other followers in their 20s and 30s who had been trained to serve as group counselors. A former participant, Sayuri Iwashita, 23, said: “This seminar, which helped me feel the preciousness of the teachings, means a lot to me. As a counselor, I would like to put all of my heart into listening to individual participants so that they will be willing to open up to me.” 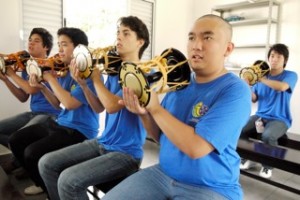 The participants started their day by attending the morning service. The program of the five-day event centered around group exercises and discussions. The participants also engaged in such activities as lectures, hinokishin activities, and the practice of the dance and musical instruments for the service during the daytime, as well as a reflective session in the evening.

On the second day, all 59 third-time participants spread the name of God while walking on the streets and gave roadside speeches in the city of Bauru. The next day, they also engaged in door-to-door missionary work, during which they were able to administer the Sazuke 44 times in total.

Karina Kameoka, 17, who had participated in the seminar twice at the Recife venue, said: “I was a bit nervous in the beginning because this was the first time that I attended the seminar at the mission headquarters. But my fellow group members listened to my worries with all their hearts. I was able to realize how precious oneʼs life is through the people I met during the door-to-door missionary work and to understand the importance of sprinkling the fragrance of the teachings and helping others be saved.” 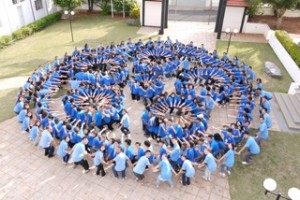 The last day of the seminar fell on the day of the mission headquartersʼ spring grand service, which all the participants and staff members attended. Chairman Kimura commented: “I was deeply moved by seeing those young followers who are to shoulder the path in Brazil in the next generation join together in singing wholeheartedly the Mikagura-uta, The Songs for the Service. We want to continue to put our efforts into organizing and conducting nurturing activities for young people so that they can further increase their enthusiasm for seeking the path with their fellow followers.”

Incidentally, 31 of the seminar participants are among those learning in the Spiritual Development Course, which is in session at the mission headquarters from January 9 to February 4.