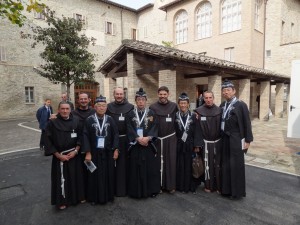 On October 27, 2011, the Day of Reflection, Dialogue and Prayer for Peace and Justice in the World was held in Assisi, Italy. About 250 leaders from 13 religions around the world as well as non-believers participated in the meeting. The meeting was organized by Pope Benedict XVI to commemorate the 25th anniversary of the World Day of Prayer for Peace. In 1986, on the same day, Pope John Paul II invited leaders from different religions around the world to gather in Assisi and pray for world peace. The second meeting was held in 2002 in response to the terrorist attacks of September 11, 2001. The theme for this year’s meeting—the third interreligious meeting organized in Assisi—was “pilgrims of truth, pilgrims of peace.”

On the evening of October 26, the day before the day-long event for world peace, Rev. Nagao and the other Tenrikyo delegates were invited to participate in the meeting for religious leaders from Japan. The meeting was organized by the Community of Sant’Egidio and was held at the headquarters of the community in Rome.

On the morning of the 27th, the pope and the religious leaders arrived at the Vatican Railway Station to board a special train, which departed at eight o’clock. After a two-hour journey from Vatican City, they arrived in Assisi. The program for the day consisted of four parts: Testimonies for Peace in the Basilica of Santa Maria degli Angeli; frugal fraternal lunch; a period of silence, reflection, and prayer at separate locations; and Renewal of the Commitment to Peace at the square outside of the Basilica of St. Francis.

The ceremony began around 10:30 a.m. after the pope and selected representatives took their seats on the stage set up inside the Basilica of Santa Maria degli Angeli. First, a video recalling the meeting of the World Day of Prayer for Peace in 1986 was shown. After the representatives of different Christian denominations and other religions as well as a professor read testimonies for peace, the pope delivered his address to those assembled at the basilica. He concluded his address by saying: “I have consciously invited delegates of this third group to our meeting in Assisi, which does not simply bring together representatives of religious institutions. Rather, it is a case of being together on a journey towards truth, a case of taking a decisive stand for human dignity and a case of common engagement for peace against every form of destructive force.”

After the pope’s address, the participants were led to the refectory of the Friary of Santa Maria degli Angeli, where they partook of a frugal communal lunch. The members of the delegations were then guided to an apartment and ushered to small rooms for a period of personal reflection and silent prayer. They were then transferred by buses to the square outside of the Basilica of St. Francis, where they were greeted by cheering crowds and journalists from around the world before they took their seats in the reserved area. 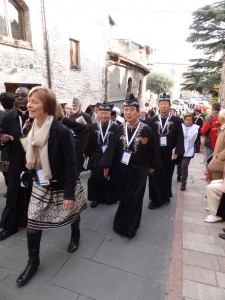 Around 4:30 p.m., the pope and other religious leaders arrived at the venue and were ushered to their seats on the dais, which had been set up at the entrance of the Lower Basilica of St. Francis. At the podium, 13 representatives took turns reading their commitment for peace in their own languages. Following the renewal of their commitment to peace, the pope gave his address, which he opened by declaring: “Violence never again! War never again! Terrorism never again! In the name of God, may every religion bring upon the earth justice and peace!” After a moment of silence, the meeting was concluded with the representatives on the stage receiving lighted lamps from young people while the delegates at the designated area lit their candles. In the evening, the pope and the delegates returned to the Vatican by train.

On the 28th, all members of the delegations were invited to the Apostolic Palace in Vatican City, which is located near St. Peter’s Basilica. In the Clementine Hall, the pope greeted the religious leaders who had participated in the prayer for peace held in Assisi on the previous day. Representing Tenrikyo, Rev. Nobuo Nagao shook hands with the pope. In the afternoon, Cardinal Tarcisio Bertone, the Vatican’s Secretary of State, gave a farewell luncheon in the atrium of the Paul VI Hall.