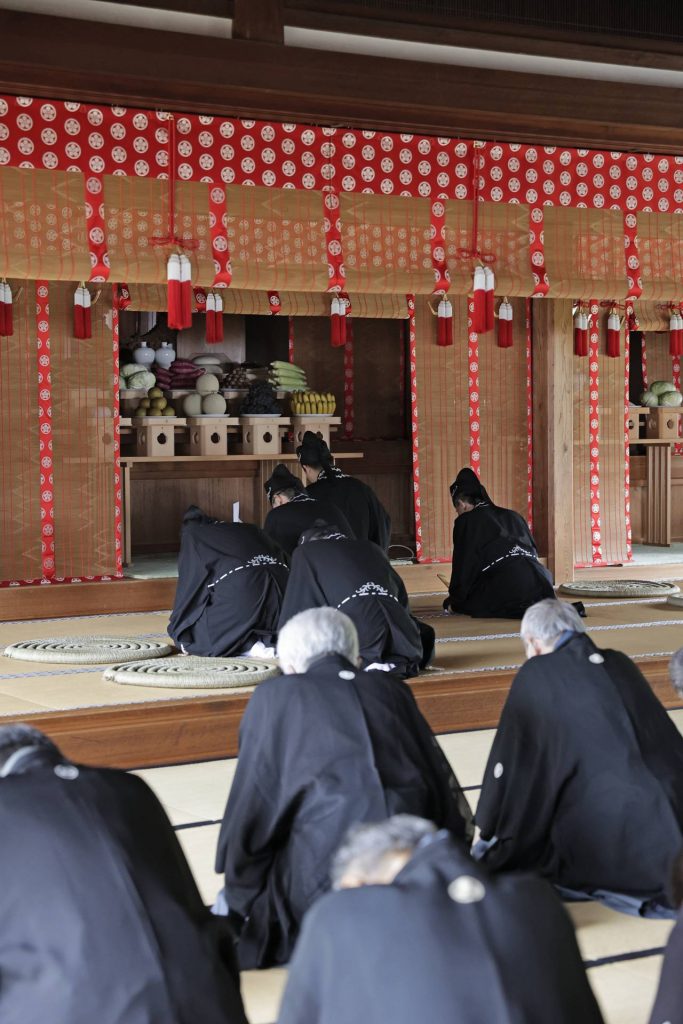 On August 15, the 20th memorial service for the third Shinbashira’s wife, Masa Nakayama—who passed away for rebirth on the same day in 2001—was duly conducted at the Memorial Hall of Church Headquarters with Successor-Designate Daisuke Nakayama presiding as chief officiant. The service was attended by many people including family members, Church Headquarters’ officials, head ministers of directly supervised churches, diocese superintendents, head ministers of branch churches, Yoboku, and other followers.

In the prayer, he said: “After becoming a member of the Nakayama family through a mysterious causality, you always supported the third Shinbashira by upholding the truth of the Shinbashira and by devoting your true sincerity. Also, you were strict but kind in nurturing and guiding people with the spirit of single-heartedness with God. I will never forget your dedication and would like to express my sincere gratitude for the kindness you showed to the children of the path.” Having honored her virtues and sincerity, Successor-Designate Nakayama continued: “Serving as the fifth president of the Women’s Association, you devoted yourself to helping its members achieve their spiritual growth and nurtured them to become the foundation of the path. All of us looked up to you as the mother of the path and adored you, and your unexpected passing was truly regrettable and sad.”

He went on to say: “The time having passed since then, today marks the 20th year of your passing away for rebirth. Assembled before you are those who admire your virtues, including those who serve at the Residence. We now would like to conduct your 20th memorial service to share and recall your memories, thereby expressing a sense of gratitude for your contribution. I ask you to accept our sincerity and continue to watch over us as we work for the path of universal salvation.”

Then after the other service officiants prayed, family members as well as representatives of Church Headquarters’ officials, of church head ministers, and of other followers offered their prayers.

In order to prevent the spread of COVID-19, the number of worshipers inside the Memorial Hall was limited. In front of the Memorial Hall, however, there were 50 marquees where attendees could sit while maintaining social distancing.

After the service officiants left the Memorial Hall, Director-in-Chief of Religious Affairs Yoichiro Miyamori gave a speech, thanking those who attended the service.

He said that Mrs. Masa Nakayama’s talks always contained the basics of how we should follow the path and things we should keep in mind, and that she put her heart and soul into making each talk appropriate for the people she was speaking to and for each time and season.

Rev. Miyamori then invited his listeners to join him in honoring her example and virtues and following in her footsteps to convey and spread the teachings to the next generation and people around us.