Home News Featured Over 4,500 Gather in the Home of the Parent for Students’ Pilgrimage to Jiba

Over 4,500 Gather in the Home of the Parent for Students’ Pilgrimage to Jiba 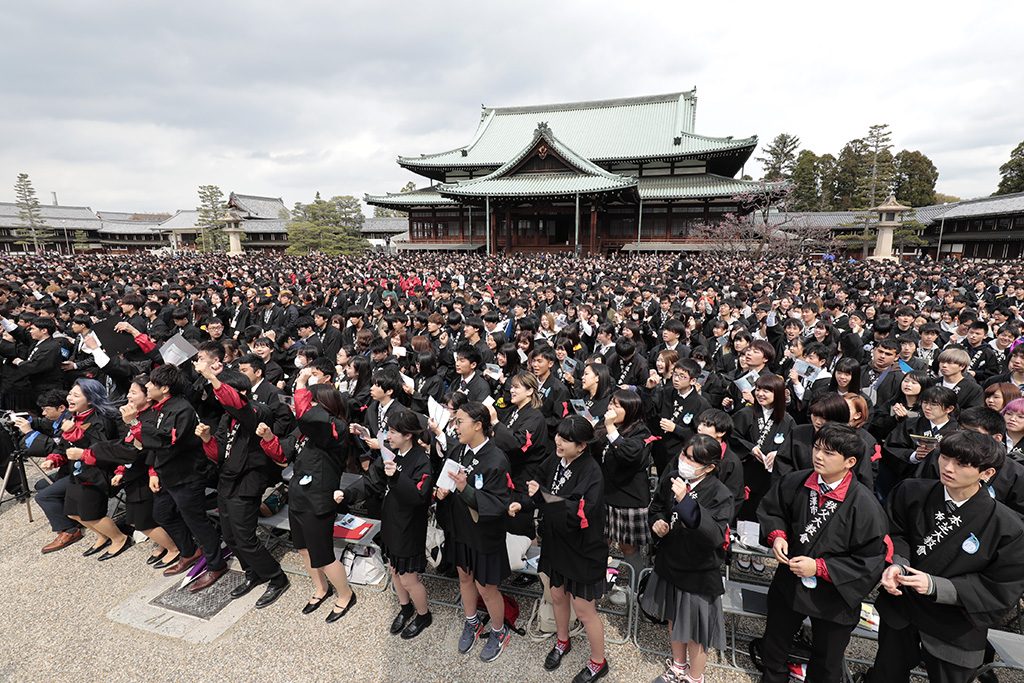 On March 28, this year’s Students’ Spring Pilgrimage to Jiba, cosponsored by the Students Association and the Students Advisory Committee, was held in the Home of the Parent under the slogan “Let us nurture ourselves to become Yoboku who will lead the next generation.” This convention drew 4,594 high school and college students from all parts of the country.

Chapters of each diocese and directly supervised church had worked hard to prepare for the event, including visiting churches and contacting members to promote participation by making use of social networking services (SNS).

About one hour before the starting time of the convention, many groups of participants were carrying their placards and banners as they made their way to the venue. The steering committee members as well as supporting staff members enthusiastically welcomed the participants to the venue.

The convention started at 10:00 a.m., when Women’s Association President Harue Nakayama, Successor-Designate Daisuke Nakayama, and his wife, Nobue, were ushered into the site. The convention began with the singing of the Eight Verses of the Yorozuyo. Opening remarks were then given by Steering Committee Chairperson Yoichiro Marukawa.

This was followed by an address delivered by Director-in-Chief of Administrative Affairs Zensuke Nakata. Referring to the slogan, Rev. Nakata explained the significance of nurturing ourselves to become Yoboku who can understand the intention of God the Parent and Oyasama and work as Oyasama’s hands and feet to bring it to realization.

He then spoke at some length about the way of following the path that would lead to the realization of the Joyous Life. “For you students of the path,” he said, “the most important key that enables you to near the Joyous Life is how you live each day.”

Rev. Nakata also encouraged the listeners to work hard to expand the circle of joy by making constant efforts to implement the Joyous Life together with their family members, friends, and acquaintances as well as fellow members of their churches and the Students Association.

He concluded his address by saying, “I sincerely hope that you will keep this slogan in mind and take one step at a time in making steady progress in spiritual growth to become fine Yoboku.”

This was followed by speeches given by two association members who talked about their joy of faith and the gratitude they feel toward fellow members. Katsuma Itakura, who had been appointed to serve as the association chairperson starting on April 1, then made a pledge on behalf of all association members.

The convention ended with the singing of the convention’s theme song, “Kibo no Hana” (A Flower of Hope). After the convention, members participated in activities organized by their respective directly supervised churches to strengthen their bonds. Also, 431 students, including 99 first-timers, attended the Besseki lectures in the afternoon.

On the previous day the students of the path held a festival on both sides of the area to the south of the Main Sanctuary, enabling the participants to enjoy food and drinks served at 80 booths as well as a variety of entertainment provided on stages.