The annual Tenrikyo Hinokishin Day, which is the culmination of all daily hinokishin activities carried out by Yoboku and followers of the path, was held on April 29 under the slogan “Let us come together with a sense of gratitude and carry out hinokishin in unity of mind” at 1,400 locations across Japan as well as in overseas countries. Participants worked up a good sweat as they spiritedly engaged in hinokishin, which refers to any selfless and thankful action performed to make repayment for God’s complete providence.

In the Home of the Parent, 3,400 participants engaged in hinokishin at various locations including the Sanctuary precincts, Tenri Station Plaza, public schools, community centers, riverbanks, and irrigation ditches in Tenri City. The participants first assembled in Church Headquartersʼ Inner Courtyard. Following a moment of prayer, Director-in-Chief of Religious Affairs Yoichiro Miyamori delivered a opening message. He said, “Let those of us who live close to Jiba take the lead in engaging in hinokishin with a sense of gratitude to God who lends us our bodies, and send a message of hinokishin to the world.” Each group of participants then headed for its respective hinokishin site. 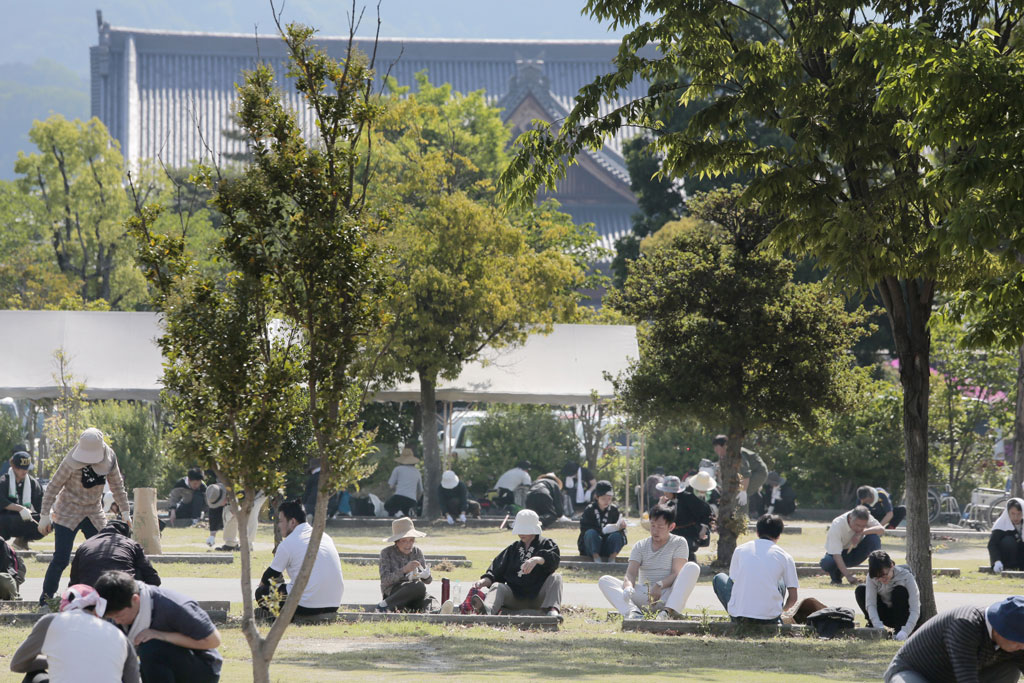 Seventy-seven students from Shuyoka’s classes for overseas followers took part in hinokishin by pulling weeds along riverbanks near East Right Wing 4 of the Oyasato-yakata building-complex. Among them was Khine Nyein Chan from Myanmar. In her home country, she was finding it hard to communicate with her colleagues at work. Her boss noticed this and told her, “There is a place called Jiba where you can change the direction of your life.” Upon hearing this, she made up her mind to enter Shuyoka in April this year. Spending time in the Home of the Parent made her more relaxed and brought her peace of mind, and she gradually became able to communicate with others more effectively. She said: “I feel refreshed when I engage in hinokishin. I am hoping to study at Tenrikyo Language Institute and learn more about what I can do to save others.”

Hinokishin Day was also observed in other parts of the world. In South Korea, a total of 201 followers engaged in hinokishin on April 29 and 30. In Mexico City, Mexico, followers cleaned up the road in the vicinity of Tenrikyo Mission Center in Mexico on April 29. In Santa Rosa, Philippines, participants cleaned a lakeside area next to Laguna de Bay, the largest lake in the Philippines, on April 22. In Honolulu, Hawaii, some 110 followers gathered to clean the Honolulu Zoo as well as paint facilities in the zoo on April 28. On the same day, 92 followers in the Republic of the Congo pulled weeds at a local high school in Brazzaville. On May 1, in Austria, followers engaged in clean-up hinokishin at a local park with participants who had yet to know the Tenrikyo teachings. On the same day, in Singapore, 55 participants picked up trash in the scenic East Coast Park.