Home News Nara Marathon 2010: Some 10,000 Runners Pass through the Home of the Parent

On December 5, some 10,000 runners from across Japan participated in the Nara Marathon 2010, the closing event of 1300th Anniversary Celebration of the Relocation of the Japanese Capital to Nara Heijo-kyo. The marathon―the first of its kind to be held in Nara Prefecture―began at Konoike Track and Field Stadium in Nara City and went through Tenri City and back. Followers not only participated as runners but also contributed their hinokishin along the marathon route. 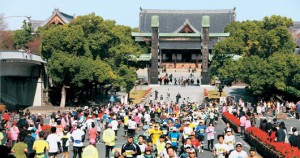 The marathon began at 9:00 A.M. and passed through the Heijo Palace Site and a UNESCO World Heritage area, which includes Todai-ji Temple and Kasuga Grand Shrine. The marathon route of 42.195 kilometers (26.22 mi.), which the Nara Marathon Executive Committee had started planning two years before, highlighted the charms of the Nara area. In addition to going along historical sites, the route went through the Shirakawa District of Tenri City, along Kita-oji Avenue to Higashi-suji Road, then down Shinnan Avenue until Tenri High School before looping back toward Nara City. Nara Prefecture had requested cooperation from the Tenrikyo organization for the event. In response, a total of 330 people―which included 130 staff members of Tenrikyo Church Headquarters and Tenri Seminary students as well as 200 members from Nara Diocese―offered their time to help along the marathon route.

Shortly after 10:00 A.M., the lead runners began to cross the Shirakawa Bridge. Nara Diocese hinokishin volunteers positioned along the marathon route marked by street cones braced themselves as the first runners approached. Spectators cheered on the runners as they ran past. A banner was put up to cheer on 11 teachers from Tenri Elementary School who entered the marathon.

At 10:20, the lead runner passed the half-way point in front of Tenri High School. The 59 members of the Tenri Junior High School Band took this as their cue to begin performing with the hope it would encourage the runners.

At 10:45, the majority of runners began streaming down Higashi-suji Road east of the Main Sanctuary. Just then, a pair of newlyweds who had just finished their wedding ceremony at the Foundress’ Sanctuary saw the marathon from the corridors. They expressed their delight at seeing the runners run past to mark the special day they were to embark on their new life together.

The Doyusha Publishing Company set up a live broadcast of the Nara Marathon on the Internet. Broadcasted images included runners passing under the South Center Wing of the Oyasato-yakata building-complex and scenes of Naoko Takahashi, the gold medalist from the Sydney Olympics, giving high fives to runners in front of Tenri High School.

Watching the live broadcast was Riho Tanaka, a patient at a hospital in Osaka City. With permission from her doctor, she brought a computer into her room to watch her husband Naoyuki, a teacher at Tenri Elementary School, run the marathon. After identifying her husband as he ran past Tenri High School, she texted his cell phone to inform him it encouraged her to see him give his all and that she would also devote her best efforts toward her rehabilitation.

Another runner, Takamasa Inui, was an alumnus of the evening course of Tenri High School. Entering the marathon allowed him to meet with his former teacher for the first time in 20 years. He spoke of how running past his alma mater brought back fond memories for him.

A runner from Fukuoka in his 70s said: “I enjoyed the scenery of the historical monuments. Yet the scenery in Tenri is like that of another world. It has an indescribable atmosphere. It was interesting all the way through.”

A man from Saitama stopped to take a few photos in front of the South Gate and said: “My wife’s friend is a follower of Tenrikyo. I thought to show her some pictures and tell her I visited Tenri.”

A little after 11:00 near the 20-kilometer mark, a 71-year-old man had a heart attack and was in cardio-respiratory arrest. Kenta An, a cardiovascular surgeon at Ikoi-no-Ie Hospital, happened to be running behind him. When Dr. An confirmed the man’s condition, he immediately applied a cardiac massage. An ambulance came to take the man to Ikoi-no-Ie Hospital. He resumed breathing upon receiving cardiopulmonary treatment in the ambulance. Dr. An said: “I participated in the marathon with some fellow doctors and nurses, but I would never have dreamed we would actually come across such a situation. I’m glad that the treatment was prompt, because if we had been even a moment late, the man’s life could have been endangered.”

The marathon route heading back to Nara City included a steep uphill climb and some runners retired from the race before reaching Shirakawa. Head Minister Masahide Yokoyama of Shirakashi Branch Church found himself interpreting for a foreign citizen running in the marathon at a first-aid station located near Tenri Cemetery.

At 1:30 P.M., the streets were reopened again as volunteers cleared the traffic cones and picked up trash. Mr. Michihiro Yamaoka, the vice chairman of the Nara Marathon Executive Committee, expressed his appreciation for the “hospitality” of Tenrikyo volunteers, saying that the marathon would not have been such a success without their cooperation.