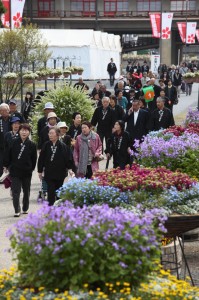 In commemoration of the 213th birthday of the everliving Oyasama, the Oyasama Birth Celebration Service was conducted on April 18 in the Main Sanctuary and Foundress’ Sanctuary of Tenrikyo Church Headquarters with the Shinbashira presiding. Roughly 68,000 followers returned from across Japan and overseas for the occasion.

Before 5:30 a.m., as the eastern sky was cast in a vermillion glow, many followers had assembled in the Foundress’ Sanctuary to extend their birthday wishes to Her. Some of them had come to wipe the corridors even before dawn.

Among the many pilgrimage groups that returned for this day, several had returned from areas affected by the March 11 earthquake and tsunami. A woman who returned overnight by bus with fellow church members from Kesennuma City, Miyagi Prefecture, said: “Although my family was unharmed, many people lost their lives in an instant. Ever since that day, I have contemplated over and over on how we are to face this great knot. I came wanting to hear what Oyasama might have to say.”

Waves of followers headed toward the Sanctuary precincts in a never-ending stream. The four worship halls and Foundress’ Sanctuary, as well as the 8,900 benches placed in the Inner Courtyard and around the Main Sanctuary, were filled with people.

The Shinbashira left the Staff Quarters at the appointed time together with other Service performers. After they had finished paying their respects at the Foundress’ Sanctuary, Oyasama’s Birthday Celebration Song could be heard being performed from the Inner Courtyard.

The Shinbashira then ascended the dais in the Main Sanctuary. In his Service prayer, he said: “We Service performers as well as church head ministers and other Yoboku are resolved to settle more deeply in our mind the boundless parental love of Oyasama, who went through many difficulties and hardships as the Parent of the Divine Model and continues working for world salvation even after Her physical withdrawal by virtue of Her eternal life. We are also determined to do everything we possibly can to carry out the task entrusted to us as Your instruments so that we will be blessed with the world in which all people help one another as brothers and sisters.”

The sermon was delivered by Honbu-in Masahiko Iburi. After beginning with an account of Oyasama’s early years, Rev. Iburi described how God the Parent taught the path to the Joyous Life through Oyasama during the 50 years following the Teaching’s day of origin in 1838.

He next pointed out the importance of journeying on the path to spiritual growth and purifying the mind, saying, “In order for us to receive the blessing of the Joyous Life World, we must first strive for the blessings that allow each of us to cultivate the mind that is filled with joyousness.”

After identifying spiritual growth as “the path of nearing the Parent’s intention,” Rev. Iburi noted that illnesses and other troubles afford us opportunities to come face to face with God the Parent. While there are many who have been blessed at such opportunities, the majority nevertheless are unable to make any further progress. When this occurs, “the inspiration they received matters only for the moment and their joy lasts only for the time being.” He contrasted this tendency with how our predecessors exerted themselves while Oyasama was physically present.

Rev. Iburi particularly devoted attention to the circumstances that led Izo Iburi, who later became the Honseki, to embrace the faith, saying: “Izo only wanted to build an altar shrine as a token of gratitude for his wife’s recovery from illness. But his offer eventually resulted in the construction of the Place for the Service.” After providing the details of how Izo began his journey on the path of faith by going to the Residence daily to devote his hinokishin toward the construction, he noted, “Oyasama indicated the path of spiritual growth, using Izo as an example.”

Next, Rev. Iburi said: “Even if you know the teachings, unless you implement them, you cannot make steady progress along the path of spiritual growth.” Such implementation is not merely limited to contributing to a construction but could take a multitude of forms, such as sprinkling the fragrance, engaging in salvation work, and administering the Sazuke. He noted that spiritual growth is attainable when we resolve to put the teachings into practice in some tangible form and fulfill this promise to God with its implementation.

Rev. Iburi then stated that what happens to be on our mind has an inseparable, two-in-one relationship with tangible action. He emphasized the importance of maintaining the balance in this two-in-one relationship, saying: “Placing too much importance on form will prevent us from making spiritual growth. In some cases, the form which is supposed to be a means to an end can become the end itself, if we lose sight of the original goal.” He then stressed that it was important to remain humble while making steady, step-by-step progress on the path to spiritual growth.

Lastly, after touching upon the recent disaster, Rev. Iburi closed his sermon by saying, “In the midst of this big knot, let us pledge to God the Parent and Oyasama that we will pour our sincerity ever more earnestly toward following the path of single-hearted salvation.”

After the sermon, the Shinbashira returned to the Foundress’ Sanctuary, where he read a prayer to extend birthday wishes to Oyasama on behalf of the congregation. 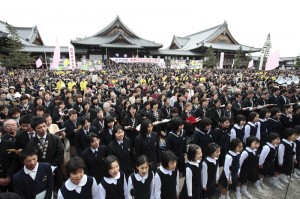 This was followed by the “Joyous Chorus,” an annual event co-sponsored by the Women’s Association, Young Men’s Association, and Boys and Girls Association. The brass band and string orchestra of Tenri High School provided accompaniment to several chorus pieces, such as “O-uta 12: Path of the Divine Model.” The voices of followers singing in adoration of Oyasama resounded in the Inner Courtyard as “Oyasama’s Birthday Celebration Song” brought the performance to a close.