Tenri High School’s Day Course
Tenri High School’s day course conducted its graduation ceremony in the presence of the Shinbashira on the morning of February 22 in the school’s multipurpose gymnasium. The ceremony honoring the 419 graduates (235 boys, 184 girls) was attended by their parents, teachers, and underclassmen.

Principal Shigehiko Iburi presented the diplomas of the graduates to class representatives and then delivered an address in which he said, “My hope is that all of you will go out into the world with a sense of pride and awareness of being a graduate of Tenri High School.” 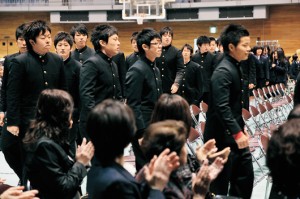 The Shinbashira then took the podium to address the graduates, all of whom had become Yoboku during the previous month. He stressed that “the significance of being Yoboku lies in working to realize the Joyous Life as intended by God the Parent” and, based on a passage from the Besseki lecture, urged the graduates not only to make the teachings part of their knowledge but also to put them into practice as they pursue their future careers.

After presenting diplomas to the graduates, Principal Shigehiko Iburi delivered a farewell address, in which he emphasized that the educational philosophy of the evening course is to nurture the qualities of perseverance, independence, and self-discipline. “My hope,” said Principal Iburi, “is that you will go out into the world with what I call ‘the spirit of Tenri High School’s evening course students’ along with a strong will and faith that will not be shaken or led astray by the current of the time.”

The Shinbashira then began his address by expressing admiration for the members of the graduating class, who had spent four years working at Tenrikyo offices and facilities in the daytime while attending classes in the evening. Referring to the fact that the graduates had become Yoboku about one year ago, he said: “I trust that many of you have gained a sense of what it means to be Yoboku through experiences such as administering the Sazuke. I want to ask all of you to continue your efforts to think and act based on the teachings so as to be able to become fine Yoboku as intended by God.”

Tenri Kyoko Gakuen High School
Tenri Kyoko Gakuen High School conducted its graduation ceremony in the school auditorium on February 23 in the presence of the Shinbashira and the former Shinbashira. Principal Satoshi Nakamura presented diplomas individually to the 203 graduates (99 boys, 104 girls). In his speech, Principal Nakamura quoted a passage from the Shinbashira’s sermon delivered at the Spring Grand Service and said, “My hope is that you will faithfully follow the path that your parents and grandparents have followed so as to be able to create harmonious relationships in your own families in the future and pass down the faith to your children.” 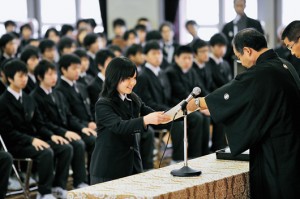 The Shinbashira then delivered an address in which he expressed admiration for the graduates, most of whom, according to Principal Nakamura’s speech, had already had opportunities to administer the Sazuke to people around them. “I would like to ask you to keep up your efforts to administer the Sazuke,” said the Shinbashira. “My hope is that you will implement the teachings you learned during the three years you spent at this school. In so doing, I would like you to think about how you can put the teachings into practice in your own career as well as what ways of thinking you need to cultivate if you are to be in accord with Oyasama’s parental heart.”

In his farewell address to the graduates, Principal Nakajima said: “My hope is that, after graduating from this school, you will always reflect upon yourself based on the teachings of God the Parent. In so doing, I would like you to recite the following four lines every day: ‘Please use me for the tasks of the path’; ‘Please help me grow spiritually’; ‘Please help me cultivate virtue’; and ‘Please help me save others.’

Overseas Department Head Yoichiro Miyamori then delivered a congratulatory speech as the guest of honor, and four graduates gave talks in which they reflected on their experiences at the institute and set forth their resolutions for the future.

Tenri Seminary
A joint graduation ceremony was conducted on March 9 for the 80 graduates of Tenri Seminary’s three courses: Tenri Graduate Seminary’s research program, 3; Tenri Graduate Seminary’s practical training program, 18; and Junior Seminary, 59. Tenri Seminary, whose principal goal is to nurture human resources who can take the lead on the path of single-hearted salvation, has a history of 110 years, making it Tenrikyo’s oldest school. Honored by the presence of the Shinbashira and the former Shinbashira, the members of the graduating class, who were attired in the formal service kimono, met the occasion with firm commitment to fulfill their role as Yoboku by devoting themselves to single-hearted salvation.

After presenting the graduates’ diplomas to their course representatives, Tenri Seminary President Motoo Matsuda delivered a farewell address. “Life has yet to bloom when you are young,” he said. “What that means is that you have a lot lying ahead of you and lots of energy. As young Yoboku, I would like all of you to take the lead on the path of single-hearted salvation while maintaining high spirits in the course of your daily lives.”

The Shinbashira then took the lectern to address the graduates. After congratulating the graduates, he explained that the goal of Tenri Seminary is to provide education for those who are to become fine Yoboku in the future. Referring to the fact that graduates were attired in the formal service kimono, he said, “My understanding is that all of you are wearing the formal service kimono because this ceremony marks the commencement of your new journey as Yoboku.” 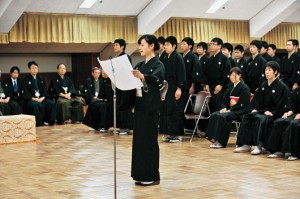 The Shinbashira then moved on to talk about the meaning of the expression “From a knot, buds will sprout.” “We usually use the expression in a positive light,” he said. “But not all buds are positive. Some people lose their faith when they face a knot, or a difficult situation.” He then added: “Whether or not buds will sprout from knots depends upon how you grapple with the challenging situations you encounter. I sincerely hope that you will pursue your future career in a way that allows buds to sprout from knots.”

In addition, the Shinbashira said that Yoboku are the material to construct the world of the Joyous Life as well as the instruments of Oyasama, and he touched upon the importance of becoming people who are useful to Oyasama. He further emphasized the importance of using the teachings as the standard for their lives and told the graduates: “There may be times when you feel helpless or get depressed. Yet I hope that you will continue your journey in a way that allows you to find joy in any situation.”

Moreover, he shared his hopes, saying: “It will not do if you are led astray by the current of the world or the opinions of people around you because that may keep you from basing your thoughts on God’s intention. I would like you to take full advantage of what you have learned at this school so that you will be able to show by example what Tenri Seminary is like.”