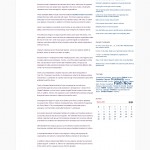 This article was contributed by Dr. Barbara Ambros, associate professor of Religions of Asia in the Department of Religious Studies at the University of North Carolina at Chapel Hill. A prominent scholar of Japanese religions, she also serves as president of the Society for the Study of Japanese Religions, which is based in the U.S. As a scholar studying pilgrimage and religious sites, she has visited Tenrikyo Church Headquarters twice before and is planning to visit there again this summer as part of her research trip to Japan.

In sharing what she sought to convey in her article, she said: “I was disappointed that the news media across the world including Japan provided such scarce coverage of the concrete activities of religious organizations in the wake of the disaster. I wrote my article to highlight the diversity of Japanese New Religions—religious groups that came into being in nineteenth-century Japan—and to show people concretely what some religious organizations were actually doing for humanitarian support.”

To read her article, please visit http://religion.blogs.cnn.com/2011/03/22/my-take-japanese-new-religions-big-role-in-disaster-response/ or click on the above picture for a screenshot.