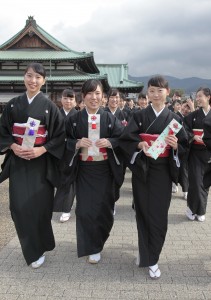 Among them was Hiromi Okuda, a third-year student of Tenri Kyoko Gakuen High School. Two summers ago, when she was in her first year, her grandfather was hospitalized. After considering what she could do for him while living in the Home of the Parent, Hiromi decided to visit the Main Sanctuary of Church Headquarters after school every day to perform a prayer service. Especially because the activities leading up to the 130th Anniversary of Oyasama were being promoted, the experience of praying to God the Parent and Oyasama for the blessing of his recovery made her increasingly aware of the kind of salvation work she could do in daily life.

Last summer, she traveled to Mexico on her school’s overseas study tour. She then learned that there were many people suffering from illnesses and other troubles and that some of the alumni of her school were engaging in salvation activities in local communities. She began to wish to convey the teachings to those in need around the world and, subsequently, decided to study the teachings in more depth at Tenri Junior Seminary after her graduation.

Hiromi said that, in addition to learning the teachings, she would sincerely perform the service to help those in need as an instrument of Oyasama.