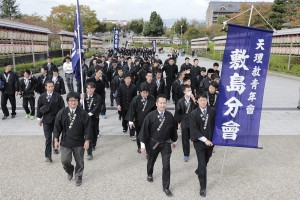 On October 27, the Young Men’s Association held its 92nd convention in the Inner Courtyard of Church Headquarters. Blessed with warm autumn weather, the convention drew approximately 11,000 association members from all parts of Japan as well as overseas.

At 10:00 a.m., Association President Daisuke Nakayama escorted the Shinbashira, his wife, and other guests into the Inner Courtyard. A moment of worship was followed by the hoisting of the association flag, the opening declaration, and the singing of the Eight Verses of the Yorozuyo.

President Nakayama then took the podium and delivered an address, in which he said: “Tenrikyo Young Men’s Association will celebrate its 100th anniversary in 2018. . . . Seeing the lead-up to the anniversary as a season for a ‘return to one, a new beginning,’ we are both returning to the founding spirit of our association and working to carry out the sort of activities that look twenty or thirty years into the future.”

Having explained the association’s activities leading up to its 100th anniversary, he suggested that association members pay attention to their states of mind and make a conscious effort to change their mind’s orientation while striving to practice filial piety and build a harmonious husband-wife relationship. He continued: “When we sprinkle the fragrance, we should impart the joy we experience through our own practice, sharing that joy with those we come across while sprinkling the fragrance as well as those close to us who have yet to start following the path. Further, we should make repeated efforts to help them be saved by inviting them to our respective churches and conveying the teachings to them. This is the very core of our activities in the lead-up to our association’s 100th anniversary.”

He talked about the joy he had experienced through practicing filial piety and about how sharing that joy had led to a new opportunity for salvation work. He pointed out that many people are having problems in their parent-child or husband-wife relationships in today’s society, and that those people tend to blame one another. “Yet, just wanting others to change will not lead to a change in them,” he said. “Unless we change ourselves, they will not change. . . . We should think about and implement what we can do to bring more joy to our parents and spouses. When we change, everything else will change.”

Having mentioned that the association’s 100th anniversary is not a goal but the beginning of its new endeavor, he concluded his address by saying, “Let us all strive to carry out our activities in the lead-up to the 100th anniversary of our association so that we can work together to create a wonderful, joyous, and delightful atmosphere in the Tenrikyo community.” 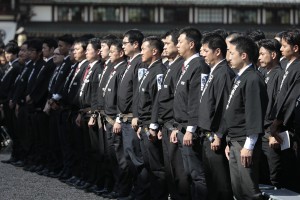 Next, the Shinbashira took the podium to deliver his address. He first spoke on the task of nurturing and increasing the number of followers in a wide range of age-brackets in order to hand down the path—which had been maintained by many predecessors—to the next generation without error. He said: “Those of us who are in a position to nurture others need to nurture ourselves with a sense of responsibility befitting the followers of Oyasama and with the clear awareness that we are entrusted with maintaining the path and handing it down to the next generation. To nurture ourselves means to grow spiritually. Our way of following the path of spiritual growth should be to make daily efforts to bring ourselves more and more into accord with the intention of God the Parent.”

He pointed out, “[T]hose of you who are in the age-bracket from which your association’s membership is drawn are, in fact, in a very important stage in life.” He went on to say, “I hope that you will grow spiritually in a fine manner while maintaining the full awareness that you are successors of the path.”

The Shinbashira further said, “If you are to savor the Joyous Life exactly as taught by Oyasama, it is necessary, I believe, to learn a variety of things that will help you to near the parental love of God the Parent and Oyasama.” He stressed the importance of reading with simple openness and understanding correctly the Scriptures as well as other official doctrinal publications in order to follow the Divine Model of Oyasama.

He then encouraged association members to find an effective way to use the teachings to settle their minds, which could easily sway when something happened in their daily lives. He said, “I believe it is a duty for all of you Arakitoryo, pioneers of the path, to make every effort to bring yourselves into accord with Oyasama’s teachings, dedicate your sincerity to helping fellow members, and work together to grow spiritually.” He added, “I would like to ask each of you to devote yourselves to engaging in your association activities and living each day in such a way that you will gain a deeper insight into the way of thinking based on the teachings and thereby develop a firm conviction of faith.”

In conclusion, he said, “I would like to earnestly request all of you members to bring your minds into unison and continue to follow the path of spiritual growth with enthusiasm so that the path will continue to grow without fail.” 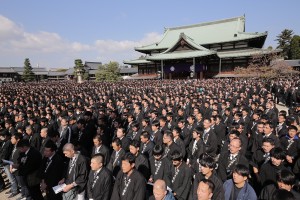 In November this year, the association launched the activities leading up to its 100th anniversary—which will be observed in 2018. Under the slogan “Work with your mind—open up the world,” every association member is encouraged to make honest efforts to spread and inquire into the teachings. Seeking to “sprinkle the fragrance from heart to heart,” the association has designated the second Sunday of each month as Arakitoryo Nioigake Day and is encouraging all association members to spread the teachings. Regarding the efforts to inquire into the teachings, the association hopes that its members will try to “implement the Joyous Life in the course of daily living” while maintaining harmony in their husband-wife relationship and practicing filial piety.