On March 28, the Students’ Spring Pilgrimage to Jiba was held in the Home of the Parent under the slogan “Let’s spread the Parent’s intention to our fellow students in the world: Setting out from Jiba!” A key component of the event was a convention held in the Inner Courtyard of Church Headquarters. Honored by the presence of the Shinbashira and his wife, as well as the former Shinbashira, it was attended by 4,876 association members including high school, technical school, junior college, and university students from all parts of the country. Among them were students from regions affected by the Tohoku earthquake and tsunami.

In view of the devastation caused by the disaster, the steering committee organized the “Gathering for Tomorrow” in place of the “Spring Festival,” which normally takes place on the night of the convention day. The participants also attended Church Headquarters’ evening service, which they performed as a prayer service for the victims. 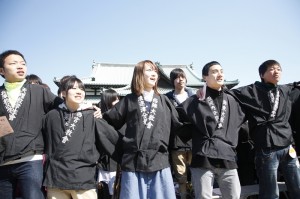 Under the clear sky, the convention began at 9:00 a.m. with the singing of the Eight Verses of the Yorozuyo. A speech was then given by Steering Committee Chairman Daisuke Sugano, who said, “My heart is filled with gratitude that we have been able to return to Jiba and gather with a lot of fellow students, despite the great knot of the earthquake.”

Next, the Shinbashira took the lectern to address the participants. He started by mentioning the devastation caused by the earthquake and tsunami and explained the importance of following the path of the Divine Model, which Oyasama demonstrated for us out of Her parental love, which is focused on single-hearted salvation.

“Spiritual growth is about nearing God’s intention,” said the Shinbashira, adding: “If you settle for faith that is focused on wanting to be saved and don’t even try to respond to Oyasama’s heart of single-hearted salvation, it cannot be said that you have made progress in your spiritual growth. . . . I would like you to make further efforts to grow spiritually while always reflecting on yourself in the light of Oyasama’s Divine Model and not to let your mind drift away from that of Oyasama.”

Mr. Ryosuke Imai, who was appointed to serve as the association chairman starting on April 1, then made a firm pledge on behalf of all association members by saying, “Taking the Shinbashira’s words to heart, we are resolved as students of the path to work with hope and in high spirits toward becoming useful Yoboku for the realization of the Joyous Life World.”

The participants, who then enjoyed various programs organized by their respective directly supervised churches after the convention, came back together for the “Gathering for Tomorrow” at a square on the east side of the South Gate. The gathering was aimed at providing an opportunity for them to think about and start with what they can do in response to the disaster.

Many groups of participants, carrying their flags and banners as they made their way to the venue, started to show up 30 minutes before the gathering. Some participants were holding banners bearing the message “Let’s do our best, Japan,” and others were wearing handmade bands with the message “Give it your best, Tohoku!” 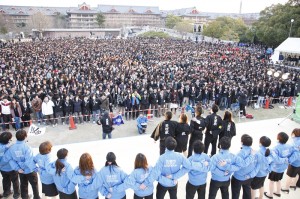 The gathering started at 5:30 p.m. with speeches by two participants. Other participants sincerely listened to their fellow members, who shared their feelings by saying such things as “I am thankful that I have been able to return to Jiba with a number of fellow students and determined to move forward while always remembering this knot” and “I believe that appreciating the body God lends us while keeping our mind connected with God the Parent as well as performing the service while keeping other people in our prayers are things we can do that will lead to helping our brothers and sisters be saved [as we are all children of God].”

After Chairman Sugano encouraged the participants by saying, “Let us take this great knot as our own concern and continue to move forward in a way that is appropriate for the students of the path,” they all joined together in reciting the event theme and singing the songs “Let’s go back together” and “Akari.”

They then made their way to the Main Sanctuary in time for the evening service, which they performed with their minds united while sending prayers to the disaster victims.

Ms. Kanako Ueno, who serves as the chairwoman of the Students Association of Miyagi Diocese, returned to Jiba with six association members and said with emotion: “At one point, we were about to give up participating in this event. But we have been able to return to Jiba safe and sound. It is all thanks not only to God the Parent and Oyasama’s blessing but also to our supervisors who worked hard to get hold of gasoline for our trip, as well as words of encouragement and emotional support from our friends and other local Tenrikyo followers. I want to tell my fellow members who couldn’t make it this time about today’s event.”

The steering committee set up a donation box at its office between the 27th and 29th of March. In addition, it handed out blank message cards to all the participants at the convention so that they could write messages, which were to be mailed to association members in affected dioceses. On the 27th, some 50 association members from the Tohoku region, including Iwate and Miyagi Prefectures, were out in four locations in Tenri City such as the Tenri Station square and the Hondori shopping arcade to collect monetary donations from passers-by.