In commemoration of the everliving Oyasama’s 218th birthday, the Oyasama Birth Celebration Service was conducted on April 18 in the Main Sanctuary and Foundress’ Sanctuary at Tenrikyo Church Headquarters with the Shinbashira presiding as chief officiant. 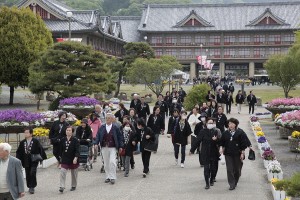 This year’s birthday celebration, coming less than three months after the Oyasama 130th Anniversary Service, drew approximately 61,000 followers of the path. Among them were 1,620 people from 23 overseas countries and regions—more than twice as many people as last year—and the prayers and sermon were simultaneously interpreted in 10 languages: English, Korean, Chinese (Mandarin), Taiwanese, Portuguese, Spanish, French, Thai, Nepali, and Indonesian.

At 5:30 a.m., as the eastern sky began to brighten, many followers who had filled up the Foundress’ Sanctuary and overflowed into the corridors extended their morning greetings to Oyasama together, clapping their hands in unison.

Among them was Onywera Erick Otieno from Kenya, who started to follow the path 14 years ago after his father had been cured of a disease. For the first time, Onywera brought his wife, who attended the Besseki lecture. He said, “As an instrument of Oyasama I would like to receive the truth of Jiba and go out to carry out missionary work in my home country.”

Tsutayo Yamazaki, who lives in Hokkaido and attends the Birth Celebration Service every year with her two daughters, said: “When I think of those who wished to come here to attend the Birth Celebration Service but couldn’t due to the earthquake that hit the area around Kumamoto, my heart aches for them. I’ve just prayed to Oyasama for the aftershocks to stop even a day sooner.”

Shortly after 9:30 a.m., the Shinbashira and other Service performers left the Staff Quarters. After they had finished paying their respects at the Foundress’ Sanctuary, the “Oyasama Birthday Celebration Song” was performed in the Inner Courtyard.

After reaching the Main Sanctuary, the Shinbashira ascended the dais to deliver the Service prayer, in which he said: “On this day, taking deeply to heart the path of Oyasama’s 50-year Divine Model, we Service performers as well as church head ministers and other Yoboku are resolved to make steady efforts to serve as Oyasama’s instruments exactly as taught in the Divine Model. . . . Please accept our resolve and respond to our sincerity by continuing to provide us with Your free and unlimited blessings that help spread the precious teachings all around the world so that the world will soon be reconstructed as the world of the Joyous Life where all people will help and encourage one another.” 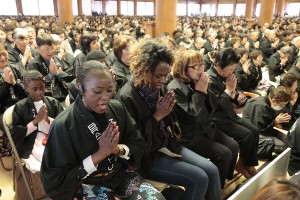 The prayer was followed by the joyous performance of the Kagura Service, after which the Shinbashira, his wife, and Successor-Designate Daisuke Nakayama proceeded to the Foundress’ Sanctuary to serve a meal to the everliving Oyasama. In the meantime, the Dance with Hand Movements was joyously performed in the Main Sanctuary, and followers joined together with enthusiasm in singing the songs for the Service.

The sermon was delivered by Honbu-in Yoshiaki Mihama. He prefaced his sermon by offering his sincere sympathies to those who had been affected by the earthquakes in and around Kumamoto, adding, “My heart also goes out to followers who wanted to but could not return to Jiba for the Oyasama Birth Celebration Service.”

He then pointed out the significance of performing the Oyasama Birth Celebration Service, saying, “I believe that celebrating Oyasama’s birthday helps reinforce our feeling and conviction that Oyasama is truly everliving.”

Quoting some of the relevant Divine Directions, he next explained that not only has Oyasama been bestowing the truth of the Sazuke, the Divine Grant, but She has been continuing to bestow the Grant of Safe Childbirth, the Proof Amulet, and the sacred gift (goku) even after She withdrew from physical life.

Rev. Mihama also mentioned that all church head ministers had attended one of the Monthly Services in a designated area next to the Inner Sanctuary during the pre-anniversary period leading up to the 130th Anniversary of Oyasama, and they each received a paper bag containing packets of sacred rice. “The sacred gift embodies the truth of the everliving Oyasama and helps them play an active role in world salvation. I personally understand that this sacred gift carries great significance,” he said.

Lastly, after quoting from the Shinbashira’s sermon on the occasion of the 130th Anniversary, Rev. Mihama closed his sermon by saying, “Let us continue to follow the path of great hope spiritedly toward world salvation with the Shinbashira as the core while relying on the workings of the everliving Oyasama.”

Following the sermon, the Shinbashira returned to the Foundress’ Sanctuary and read a prayer in front of the everliving Oyasama. After extending birthday wishes to Her, the Shinbashira expressed his resolve on behalf of all followers by saying, “Having further deepened our joy and awareness of being Your instruments, we are all determined to follow the Divine Model honestly and straightforwardly and devote ourselves to the tasks of single-hearted salvation with our minds in unison.” 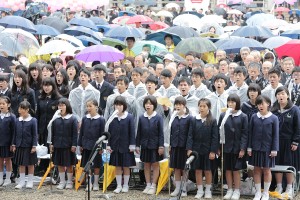 Then an annual event called “Joyous Chorus” took place in the Inner Courtyard under the co-sponsorship of the Women’s Association, the Young Men’s Association, and the Boys and Girls Association. The assembled followers joined together in singing six songs to celebrate the occasion, including the aforementioned “Oyasama Birth Celebration Song.”