Home News Over 9,200 Gather in the Home of the Parent for Students’ Pilgrimage to Jiba

Over 9,200 Gather in the Home of the Parent for Students’ Pilgrimage to Jiba

On March 28, the Oyasama 130th Anniversary Students’ Spring Pilgrimage to Jiba, cosponsored by the Students Association and the Students Advisory Committee, was held in the Home of the Parent under the slogan “Let us nurture ourselves to become Yoboku who will lead the next generation.” Amid increasing momentum for nurturing human resources for the path, this convention drew the largest turnout ever with 9,274 high school, technical school, junior college, and university students. 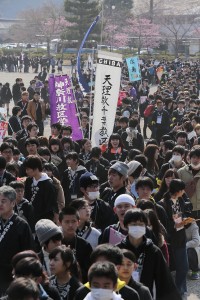 As soon as a loudspeaker announcement of the opening of the venue echoed throughout the Sanctuary precincts, the participants began to file into the Inner Courtyard, carrying placards and banners of their dioceses or directly supervised churches. The convention began at 10:00 a.m. when the Shinbashira, Mrs. Nakayama, and Successor-Designate Daisuke Nakayama arrived in the Inner Courtyard.

Following a moment of prayer and the singing of the Yorozuyo, Students Association Chairperson Haruka Asano made opening remarks. She said: “We have made every effort to engage in salvation work in anticipation of this year’s 130th Anniversary of Oyasama and to achieve our goal of bringing 10,000 students to this convention by caring for one another and encouraging one another. . . . For this convention today we launched the slogan ʻLet us nurture ourselves to become Yoboku who will lead the next generation.’” She ended by saying, “Let’s take to heart the message that the Shinbashira is going to give us so that we can make a resolution to become Yoboku who will lead the next generation of the path.”

The Shinbashira then took the podium to deliver his address. Starting off by noting that the Oyasama 130th Anniversary Service was duly conducted, he explained that it marked but one milestone on our path of spiritual growth leading to the Joyous Life and that our mission, which was to last through endless generations, was to take further steps along the path of spiritual growth. 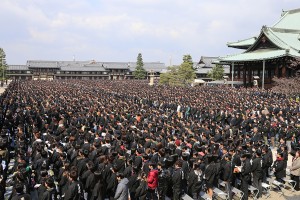 The Shinbashira then said that the most important thing for students was to take a positive attitude toward studying and learning. He told his listeners that, as they led their student lives as Tenrikyo students, they should make a conscious effort to study, learn, and implement God the Parent’s intention and Oyasama’s teachings so that they could enhance their ability to be aware of God the Parent’s blessings in their daily lives and let this awareness inform their words and actions as well as other aspects of their lives.

He said that in order to learn about Oyasama’s parental love embodied in the Divine Model, settle it in their mind correctly, and cultivate firm faith, “it is important to work hard at your studies, develop your powers of comprehension, nurture your intellectual ability, and exercise your body—thus making efforts to discipline your mind and body—as you lead your student lives as students of the path.”

He also told the listeners that during their student days they might encounter life’s difficulties that often cause worries and suffering. He mentioned that especially in such circumstances, they should put their effort and ingenuity into having buds sprout from knots of difficulties rather than give up in despair; this, he pointed out, was one way they could put human wisdom to good use.

“The attitude of facing up to and dealing with knots by practicing patience as opposed to running away from them becomes the fertilizer that allows us to settle the mind through joyous acceptance, nurture the mind committed to following Oyasama’s example exactly as shown in the Divine Model, and cultivate the mind that does not become easily discouraged,” he said.

To conclude his address, the Shinbashira expressed his hope that the listeners would sense God the Parent’s blessings in their daily lives, implement the teachings in pursuing Oyasama’s mind, and continue to follow the path with bright and spirited minds so that they could grow up to be fine instruments of Oyasama. 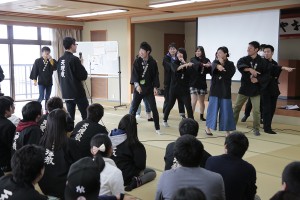 The students then participated in various programs organized by their directly supervised churches. Also, 753 students, including 140 first-timers, attended the Besseki lectures in the afternoon.

On the previous day, the students of the path held a festival in the areas on both sides of the South Gate, enabling the participants to enjoy food and drink served at 84 booths as well as a variety of entertainment provided on stages.