Home News About 70,000 Followers Rededicate Themselves to the Divine Intention

About 70,000 Followers Rededicate Themselves to the Divine Intention

On January 26, the Spring Grand Service commemorating the day when Oyasama stepped out to level the ground throughout the world out of Her parental heart that urges human beings, Her children, to grow spiritually was performed in the Main Sanctuary at Church Headquarters with the Shinbashira Zenji Nakayama presiding as chief officiant. Roughly 70,000 followers from Japan and overseas reacquainted themselves with the parental intention packed into this day and renewed their pledge to make progress toward world salvation. 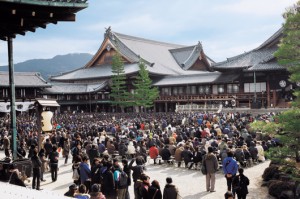 In the Service prayer, the Shinbashira declared: “We Service performers as well as church head ministers and Yoboku are resolved to exert our utmost sincerity in reaching out to those suffering from various kinds of illnesses and troubles by performing the Service, which Oyasama urged us to perform even by shortening Her term of life, as well as by administering the Sazuke, which She bestows widely upon us with the portals open. We are thoroughly determined to make constant efforts in a way that will allow us to receive blessings from You, our precious Parent.”

At the end of the prayer, he said, “We humbly ask You to accept our resolve and continue to provide us with free and unlimited blessings in all matters so that the path of world salvation will further spread and expand, thereby allowing the world to be reconstructed, even a day sooner, into the Joyous Life World, in which all people in the world respect and help one another as brothers and sisters.” 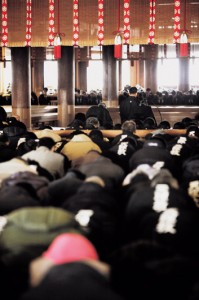 This was followed by the joyous performance of the Kagura Service and the Dance with Hand Movements.

A high-pressure area in the west and a low-pressure area in the east brought a typical winter day to Jiba. When the sun hid behind the clouds, the winds felt a notch colder. Light snowflakes fell as followers in the four worship halls and those sitting on the 4,200 benches placed in front of the South Worship Hall and in the Inner Courtyard sang the Mikagura-uta in unison. The Service then concluded eight minutes before the daily 2:00 p.m. siren that sounds to signal the time Oyasama withdrew from physical life.

The Shinbashira then took the podium to deliver the sermon. At 2:00 p.m.—the exact hour marking Oyasama’s withdrawal from physical life—he paused for a moment to offer a brief prayer in the direction of the Foundress’ Sanctuary.