Tenrikyo Women’s Association: Members Gear Up for the Upcoming 100th Anniversary Convention in Unity of Mind

Tenrikyo Women’s Association held a seminar for chairwomen of directly supervised chapters and diocese chapters on January 27 with an attendance of 256 chairwomen. The seminar began with an address by the association president, Mrs. Harue Nakayama. She first thanked the participants for the efforts they have been dedicating to the association’s 100th anniversary activities. She said that it was important to fulfill their respective roles and positions while making full use of the qualities and virtues befitting women. After explaining some details about the Besseki Months to be conducted around the 100th anniversary convention and again in autumn, the president urged the participants to implement the association’s activity guidelines and make further efforts to achieve the 100th anniversary slogan: “Let each of us, by God’s blessing, have one person attend the Besseki lecture.” She concluded her address by saying: “Let us women of the path bring understanding to one another and unite our minds as one. During the short time remaining before the 100th anniversary convention, please exert your utmost efforts and engage in the association activities with your chapter members in high spirits.” 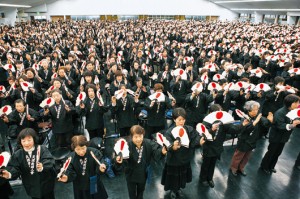 After listening to the president’s address, the chairwomen were divided into 24 groups to conduct group discussions. Basing themselves on the Shinbashira’s sermon delivered at the Spring Grand Service on the previous day, they discussed how to go about implementing the guidelines for association activities and achieving the 100th anniversary slogan.

The next day, the 28th, marked the 100th anniversary of the association’s founding. It was on January 28, 1910, exactly 100 years ago, that Tenrikyo Women’s Association was founded with Mrs. Tamae Nakayama, wife of the first Shinbashira, serving as the association’s first president. To commemorate that important date, the association organized an event in Jiba to help members engrave in their minds God the Parent’s intention in founding the association, take to heart the spirit of their predecessors who engaged in the association activities with the successive presidents as the core, and make further progress in their spiritual growth as befits this auspicious season. A total of 3,323 members returned to the Home of the Parent from all parts of Japan to take part in the event.

At 8:30 a.m., those among them who are chairwomen of directly supervised chapters and diocese chapters assembled in the East Worship Hall of the Main Sanctuary, where they performed the seated service with President Nakayama as the core while savoring the joy of marking the 100th anniversary and pledging renewed resolve. At 10:00 a.m., all participants proceeded to either Dining Hall 2 or 3, where lectures were given by Mrs. Toki Umetani and Mrs. Tamayo Nakayama, respectively.

At Dining Hall 2, Mrs. Umetani started her lecture by basing herself on a set of Divine Directions concerning the establishment of the Women’s Association. She said: “If all of us bring understanding to one another and settle the truth of the path and the truth of the teachings in our mind while keeping the Divine Model of Oyasama as our exemplary model, then joy will well up from our heart and settle in our mind. That is precisely what God the Parent desires of the Women’s Association.”

After reviewing the 100-year history of the association’s activities conducted with the successive presidents as the core, Mrs. Umetani talked about the importance of trying to live in accord with Oyasama’s Divine Model in all circumstances. She concluded her lecture by saying: “Since all of us are trying to follow the path of single-hearted salvation, I believe that we need to experience more of the difficulties that come with saving others. In the tasks we receive as members of the association and in the tasks of the path in the course of our daily life, let us willingly accept those difficulties so that we will be able to hold the 100th anniversary convention with joy in our hearts.”

After the lectures, the members at both venues performed the dance to the Eight Verses of the Yorozuyo and the Twelve Songs in unity of mind as an expression of their resolve to make headway on the path of single-hearted salvation.

The members who went to Nara City were broken up into smaller groups and gave speeches at 17 locations, including JR Nara Station and Kintetsu Nara Station. At each location, members held a banner bearing the message “Husband and wife, parents and children, and family bonds, toward the Joyous Life.”

The group members joined together in singing the Eight Verses of the Yorozuyo before taking turns giving roadside speeches, in which they talked about their joy of faith. Meanwhile, members who were not giving a speech or holding a banner handed out pamphlets to passersby. After giving her own speech in front of Nara District Court, President Nakayama visited several locations in Nara City where other members were giving speeches.