In anticipation of the 130th Anniversary of Oyasama, various preparations are being made in the Home of the Parent.

The expansion of paved pathways in the Inner Courtyard, which began last February, was recently completed. The pathways, whose overall length is 1,165 meters (3,822 ft.), are designed to improve convenience for wheelchair users in the Sanctuary precincts.

Since the 13th of last month, the remodeling of the northern half of Higashisuji Street has been underway. The central dividers on the street are being removed to expand the roadway and install sidewalks on both sides. The remodeling is to be completed by the Oyasama Birth Celebration Service in April. 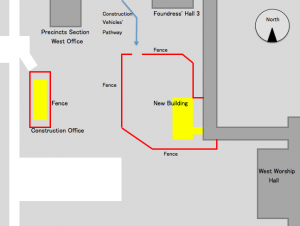 Also, a building equipped with wheelchair ramps will be built adjacent to the southwest corner of the Sanctuary Corridor. A service was conducted on January 25 in the South Worship Hall to offer prayers for its successful completion. The construction began on the 27th. This building, which is to be completed by the Autumn Grand Service this year, will ensure easy access to the Sanctuaries for wheelchair users and the elderly. The construction site has been fenced off so that a part of the Sanctuary precincts has been restricted (see diagram on right).

The Religious Affairs Bureau is cautioning people to watch out for construction vehicles going in and out of the construction site.