On November 15, the Mission Headquarters in Taiwan conducted the service to commemorate its 80th anniversary in the presence of the Shinbashira, his wife, and Successor-Designate Daisuke Nakayama. About 800 participating followers listened to the Shinbashira’s address and pledged together to take a great leap forward in the path in Taiwan. The next day, the guests of honor attended the Taiwan Youth Gathering. Between the 16th and the 18th, they visited two churches and two mission stations to encourage local followers.

Three years ago at its October grand service, the mission headquarters announced the goals for spiritual maturity in anticipation of the 80th anniversary: “Let us nurture Yoboku who can shoulder the future path” and “Let us dedicate ourselves to administering the Sazuke and put our sincerity into performing the service at churches and mission stations.” A variety of activities have since been organized based on the goals.

Last November, in preparation for the headquarters’ anniversary and the 130th Anniversary of Oyasama, the Followers Convention Commemorating the 80th Anniversary was held as an opportunity for local followers to raise their spirits to new heights with their minds in unison, drawing about 500 people from all over Taiwan.

As momentum was building up for salvation, the Oyasama 130th Anniversary Yoboku Gatherings were held at seven venues in Taiwan with a total participation of 796 people. 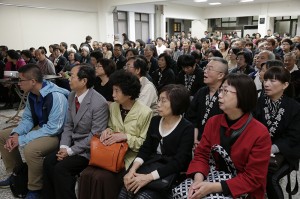 On the day of the anniversary, the temperature went up to 21°C (70°F) in the city of Taipei, where the mission headquarters is located. Shortly after 8:00 a.m., buses and cars carrying loads of followers arrived at the headquarters one after another. Those who were not able to fit in the worship hall took their seats in an assembly hall or outside the buildings where chairs had been placed. Big screens had been set up for those people. At the entrance to the worship hall, a big purple welcome banner was hung for the guests of honor from Japan.

At 10:00 a.m., the Shinbashira, his wife, and Successor-Designate Daisuke Nakayama entered the sanctuary to the accompaniment of solemn gagaku music. The congregation paid their respects to God the Parent, Oyasama, and the Mitama-sama in unison with the Shinbashira.

Mission Headquarters Bishop Hatsuyuki Nishi then read a service prayer in Chinese, in which he expressed gratitude for God’s blessings that had enabled the headquarters to continue since its establishment and went on to say: “We should never forget the great accomplishments made by our predecessors including church head ministers and other Yoboku. At the same time, all of us Yoboku should always keep today’s joy in our heart and pledge to work hand in hand with one another to walk the path of helping save people in Taiwan.”

The Shinbashira then took the lectern to deliver his address. He started by thanking local followers for their daily efforts and touched on the history of the path in Taiwan. After saying that the initial missionary effort began in Taiwan ten years after Oyasama withdrew from physical life, he explained the significance of observing the anniversaries of the mission headquarters.

The Shinbashira then specified two roles of the mission headquarters, saying that, like any church, it is a place endowed with the “truth of a church name” and should play a core part in “weeding and fertilizing,” the latter referring to providing care and guidance. He elaborated that the mission headquarters, which has the “truth of a church name,” should serve as a model of the Joyous Life where people can experience a bright atmosphere that can live up to God’s intention. He added that it was also important to serve as a place where people who feel indebted to God’s blessings get together, cultivate their minds while seeking the faith, and learn how to live the Joyous Life, so that they can go out to spread the teachings to other people.

With regard to the other role, he stated that the mission headquarters should receive the truth of Jiba, which is the source of “weeding and fertilizing,” with an open mind, and deliver it to local followers as it is with the utmost attention. He emphasized, “It is also my hope that you always remember to be single-hearted with God while basing your standards for decision-making on Oyasama’s teachings, instead of worldly common thinking.”

Pointing out that the next year was the final year for conducting the pre-anniversary activities in the “three years, one thousand days” period, he said: “The path to world salvation will open up by itself as we Yoboku repeatedly and steadily reach out to people, starting with those close to us, through our efforts to sprinkle the fragrance of the teachings and help them be saved. . . . First and foremost, it is important to sow the seeds of the Joyous Life around us.” He concluded his address by saying, “I would like you to use the 80th anniversary as an opportunity to redouble your efforts to enhance your activities so that the path in Taiwan will expand further and achieve greater growth.”

The Shinbashira then led the seated service. The congregation joined together in singing the Mikagura-uta, the Songs for the Service, in unity of mind. 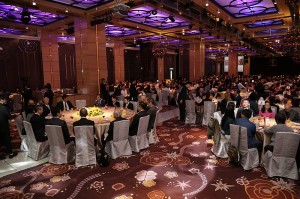 The post-service reception was held in a venue in the city. The participants enjoyed music and dance performances presented by local followers.

The next day, the Taiwan Youth Gathering was held in the presence of the Shinbashira, his wife, and Successor-Designate Daisuke Nakayama with the participation of approximately 100 young followers including students, Young Men’s Association members, and members of the young women’s group. The gathering was designed to provide a platform for young followers to get together in this anniversary season and pledge to make further progress in spiritual growth in preparation for the 130th Anniversary of Oyasama.

Successor-Designate Daisuke Nakayama addressed the participants at the gathering. He started by speaking of how he liked the teaching of tanno, joyous acceptance. Referring to the meaning of the word, he told the participants that living each day in the spirit of single-heartedness with God would enable them to find joy in any kind of situation. He added, “In order to cultivate the spirit of single-heartedness with God, it is important not only to make a point of learning the teachings but also to put them into practice in our daily lives as exactly as we are taught with simple openness.” He shared his feelings on his daily engagement in missionary and salvation work, saying: “Now I find myself a little more able to live each day joyously and spiritedly and maintain the mind of joyous acceptance no matter what happens. . . . Missionary and salvation work gives us an opportunity to convey the teachings to others and help them be saved, as well as to deepen our faith and make spiritual growth. What a blessing that is for us followers!”

Referring to the current season of the pre-anniversary activities period, he noted: “In the hope of bringing joy to Oyasama, we should give words of encouragement and support to one another as we devote ourselves to missionary and salvation work. Let our youthful energy give an extra boost to the pre-anniversary activities in the remaining period.”

Chairman Zhang commented on the gathering: “We were very honored and delighted to have Mr. Daisuke Nakayama, the newly inaugurated president of our association. With this joy in mind, we intend to increase our efforts to sprinkle the fragrance of the teachings and help save others, thereby building momentum for salvation here in Taiwan.”

Bishop Nishi commented: “The goals for spiritual maturity we set helped increase momentum for salvation among local followers. With that momentum, we want to continue working strenuously with our minds in unison so that we can bring as many people to Jiba as possible during this pre-anniversary activities period.”