On August 25, the noon service was performed at the Main Sanctuary, and some 2,000 Yoboku and followers came to attend the service despite heavy rain. Many of them were members of the pilgrimage groups who returned to Jiba to attend the next day’s August Monthly Service of Tenrikyo Church Headquarters. In an effort to add momentum to the implementation of salvation work, many churches also organized pilgrimage groups to attend the Besseki lectures. The Home of the Parent was vibrant with a large number of followers sowing seeds of sincerity in Jiba.

It has been seven months since the activities for the 130th Anniversary of Oyasama started. As reported before, the noon service has been performed since June, providing Yoboku and followers who make pilgrimages to Jiba with an opportunity to join together to show their gratitude for their return to Jiba, pray for the salvation of others, and make a pledge to promote the activities leading up to the 130th Anniversary of Oyasama. In parallel with the launch of the noon service, the Hinokishin Information Desk was established in the former Lost Children Center (just north of the Precincts Section’s South Office), and salvation work in the Main Sanctuary is being conducted on the days when the noon service takes place. Also, packed curry lunches are available (250 yen) for the convenience of those who attend the noon service or engage in hinokishin. So far, the noon service has been conducted 14 times (as of September 1, 2013), drawing a total of approximately 17,000 people, many of whom participated in hinokishin with their family members in the Sanctuary precincts prior to the service and took advantage of the opportunity for the Sazuke administration following the service. 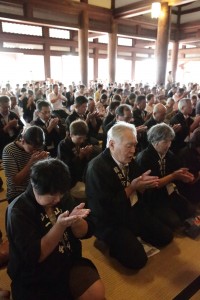 At noon, the seated service was performed with the inclusion of the wooden clappers. Rev. Koji Tokuyama, head minister of Kaie Branch Church, attended the service carrying cards, on which Yoboku and followers of the church had written their resolution to engage in salvation work. He said, “On behalf of the church, I prayed for the salvation of those who are suffering from illness.” Seated in the very front row in the East Worship Hall was Mr. Michio Yokota, a lay minister of Suzuyama Branch Church, who said: “I prayed for the salvation of those in my immediate circle and also renewed my pledge to engage in salvation work. I would like to become a Yoboku who carries out the tasks of the path while fulfilling my responsibilities at my workplace.” Following the performance of the noon service, staff members of the Counseling Section of the Divine Gifts and Sanctions Bureau administered the Sazuke in the West Worship Hall to those seeking help.

That afternoon, some of those who attended the noon service formed lines in the Besseki Lecture Hall. Among them were followers of Kawaramachi Grand Church, which had organized a group pilgrimage. Setting a goal of drawing a total of 3,000 people to their first Besseki lecture during the “three years, one thousand days” season, the grand church plans to organize a group pilgrimage four times this year in the hope that Yoboku and followers will be able to make a decisive effort to implement salvation work.

Mrs. Taeko Fukuda, a Yoboku of Ujitawara Branch Church, returned to Jiba, bringing her friend to the Besseki lecture. She said: “My friend of ten years attended the Besseki lecture for the first time. It is my conviction that anyone can be saved so long as he or she returns to Jiba. I would like to sprinkle the fragrance of the teachings and work for the salvation of others in high spirits.”