On April 18, the Oyasama Birth Celebration Service was held at Tenrikyo Church Headquarters with the Shinbashira presiding as chief officiant. Blessed with warm weather, approximately 67,000 followers from across Japan and overseas returned to the Home of the Parent. Filling their hearts with the joy of celebrating the 215th birthday of Oyasama, their “beloved Parent,” the worshipers sang the Songs for the Service in a unity of mind. 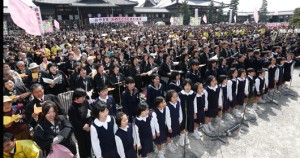 Shortly after 9:30 a.m., the Shinbashira, accompanied by the other Service performers, first paid respects to Oyasama at the Foundress’ Sanctuary and then proceeded to the Main Sanctuary. At 10:00 a.m., he ascended the dais to deliver the Service prayer, in which he said: “With renewed resolve on this day, we Service performers as well as church head ministers and other Yoboku will take deeply to heart Your parental love that desires world salvation as well as the 50-year path of Oyasama’s Divine Model, which She showed us by living each day joyfully and spiritedly even in the midst of difficulties and hardships. We will bring ourselves into accord with Your instruction that is given in the words ‘If you do not follow the path of the Divine Model, there is no need for a Divine Model.’ Thereby, as Oyasama’s instruments, we are resolved to take great strides along the path of single-hearted salvation as befits this seasonable time.” 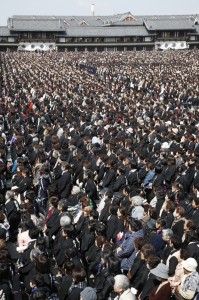 The Shinbashira returned to the Foundress’ Sanctuary after the sermon and then read a prayer to Oyasama. Congratulating Oyasama on Her birthday, he expressed resolve, on behalf of all followers, to consistently work for single-hearted salvation.

The occasion drew many people from overseas—from 19 different countries and regions. From Panama, for instance, 17 Kuna people returned to the Home of Parent. Mauricio Mendez Martinez, who brought this group of people, had heard the teachings from a Tenrikyo missionary who visited Panama last July. He made a pilgrimage to Jiba for the first time early this year. After returning to Panama, he began to share the teachings of the path with people around him. He said, “I’m very grateful that I can celebrate the birthday of the everliving Oyasama with followers from around the world.”

Tenrikyo Zhenming Zhanghua Church in Taiwan organized a pilgrimage group of 84 people to Jiba. Among them, 44 people, including 26 first-timers, attended the Besseki lectures and 8 people received the truth of the Sazuke. Li Fang-yan was one of those first-timers. “I wanted to listen to the teachings of Tenrikyo because of the way a friend of mine is so devoted to faith in the path. Jiba is full of prayers. I now hold the teachings closer to my heart,” she said.