Home News Some 74,000 Savor Joy of New Year at Annual Sechi Festival in Home of the Parent

Some 74,000 Savor Joy of New Year at Annual Sechi Festival in Home of the Parent 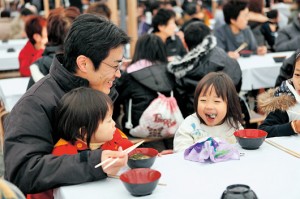 The annual Sechi Festival was held between January 5 and 7 in Jiba, and 73,630 people returned during the three days. Several members of the Diet were seen among participating followers and families. 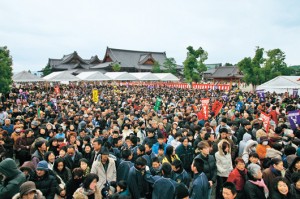 The event began at 10:00 a.m. on January 5 with the sounding of a pair of wooden clappers. Returnees who had offered their first prayers of the New Year at the Main Sanctuary made their way to the entrance gates to partake of sake and went on to one of six venues, where they were treated to zoni, roasted rice cakes served with greens in a clear broth. 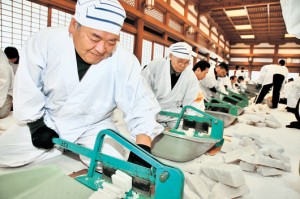 Rice cakes that had been offered at the Main Sanctuary for the first three days of the New Year amounted to about 40,800 kilograms (45 U.S. tons). These large rice cakes were cut up to be part of the zoni that brought warm smiles to young and old alike.

Helping out at the venues were approximately 4,500 volunteers—including Church Headquarters staff, students attending Shuyoka (the Spiritual Development Course) and nearby Tenrikyo schools, and members of the Students Hinokishin Corps from all over the country. They attended to various hinokishin tasks such as acting as venue guides, serving returning followers, and roasting rice cakes. Youthful voices wishing returnees a Happy New Year and offering them seconds echoed in each of the venues. 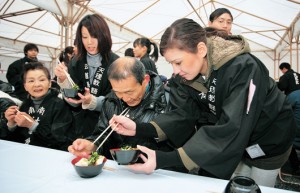