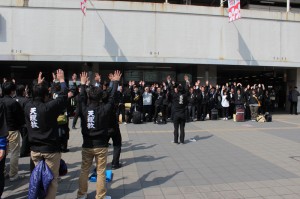 On March 29 and 30, a preliminary seminar for new residents of missionary houses was held in the Home of the Parent. A total of 79 new recruits (61 men and 18 women) from various age-groups and backgrounds will devote one year to sprinkling the fragrance and engaging in salvation work while living at 14 missionary houses across Japan. The ages of the recruits ranged from 21 to 68.

On the night of the 29th, Mission Department Head Motoyoshi Tomimatsu gave a lecture in which he said, “I ask that each of you resolve your mind to make the respective places you are heading to a place to engage in missionary work for the rest of your life.”

On the 30th, the recruits assembled in Foundress’ Hall No. 3 after the morning service to hear a talk from the Shinbashira. He began by describing the backdrop leading to the establishment of the missionary houses and pointed out that they now largely have the significance as training centers for prospective missionaries and ministers. Further, he mentioned to the recruits that they were going to be engaging in missionary work in a privileged environment since they would be living with their fellow missionaries from whom they could seek advice and would not have to worry about earning a living.

The Shinbashira then cautioned that while they might be able to focus on missionary work for the next year, there was a danger for them to become less active and revert back to their former ways after returning home. He urged them to live at the missionary houses in a way that would benefit them when they continue to serve the path in the future.

After mentioning that the job of a missionary house resident was to engage in missionary work, the Shinbashira emphasized that it was important to not only learn how to explain the teachings of the path to people who are eager to hear them but also to learn ways of teaching in a manner that allows them to deeply settle the teachings in their minds afterward. He then suggested that assertively pouring one’s all into missionary work while devising and learning ways to better convey the teachings allows one to further settle the teachings until they become second nature.

Next, the Shinbashira noted the importance of setting a goal such as forming a pilgrimage group. Yet even more important than gaining the results one aimed for, he said, was the process of pondering, making the required effort, and taking a step or two closer to spiritual maturity through one’s various experiences while engaging in missionary work.

Finally, the Shinbashira encouraged the new missionaries by saying: “While I am sure you will go through much, I would like you to walk with perseverance, aim to make your year at the missionary house a meaningful one, and do your best until the very end.”

Before this preliminary seminar, on March 27, a gathering was conducted at Moya 38 for the 77 people who had just finished spending the last year at their respective 14 missionary houses. Their accomplishments included returning to Jiba 270 times (including pilgrimage groups), bringing 1,766 people to Jiba, administering the Sazuke 42,436 times, having 74 people attend the Besseki lecture for the first time and 146 people attend a subsequent Besseki lecture, and leading five people to receive the truth of the Sazuke, six people to enroll in Shuyoka, and 86 people to attend the Basics Course.