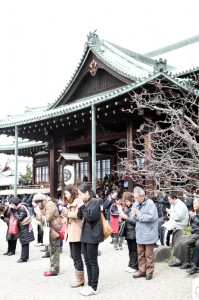 The February Monthly Service of Church Headquarters was conducted on the 26th in the Main Sanctuary with the Shinbashira presiding as chief officiant.

In the Service prayer, the Shinbashira expressed gratitude to God the Parent for leading us wondrously each day and for the boundless blessings that guide us on the path to spiritual maturity. He said: “We Service performers as well as church head ministers and other Yoboku will engrave deeply in our hearts Your intention behind the Service that You hastened throughout Oyasama’s 50-year journey. We will make sincere efforts to achieve powerful strides toward world salvation through the Service and the Sazuke so that churches in each region established as places that represent Jiba may fulfill their role as hubs for single-hearted salvation.”

This was followed by a performance of the Kagura and Teodori. Whereas the high temperature exceeded 10ºC (50ºF) on preceding days, the temperature dropped to 6ºC (42.8ºF) on the 26th. Worshipers wearing thick coats sang the songs for the Service with their minds in unison on what felt like a mid-winter day.

The sermon was delivered by Honbu-in Hidekazu Kita. Rev. Kita began by picking up on the subject of single-heartedness with God from the Shinbashira’s sermon at the previous month’s Spring Grand Service, saying, “Among our predecessors who lived with single-heartedness in their hearts, the first example that came to my mind was Izo Iburi.” He then spoke about the events that led Izo Iburi, who later became the Honseki, to embrace the faith.

He described how Izo traveled the six kilometers between his home and the Residence three times within one or two days to express his gratitude to Oyasama for saving his wife, Osato. After looking back at how Izo and Osato helped at the Residence as husband and wife even after the knot at the Oyamato Shrine, Rev. Kita noted: “Turning to people around us, even if they have true sincerity, it is not easily noticeable so long as their day-to-day mundane lives are free from worries. Yet when they suddenly find themselves in a situation that is out of the ordinary, their sincerity clearly surfaces from deep inside.”

Next, Rev. Kita gave his own take on the teaching of “early rising, honesty, and work” that Oyasama gives to Izo in Anecdotes of Oyasama, no. 29, “Three Treasures.” (On early rising) “I believe we should wake up expressing our appreciation of the body as a thing borrowed by giving thanks to God for allowing us to start the morning in good health and relieving our weariness from the previous day.” (On honesty) “[Honesty does not refer to] speaking exactly what we feel without consideration of others’ feelings—which would give rise to strains in our social relations. [Its real meaning is demonstrated by the] straightforward way in which Izo practiced and continued to implement what Oyasama taught him.” (On work) “It is most important that one not work furiously for one’s own sake but in order to make people around one comfortable.”

Further, after describing several other episodes involving Oyasama, Izo, and Osato, Rev. Kita emphasized that we should not stop at a mere historical appreciation that someone named Izo Iburi existed. He made an appeal regarding the importance of looking back on the day of origin when our own family embraced the faith as well as the protection we have received since we were born until today, saying: “We ought to ask ourselves, What was the illness or set of circumstances that guided our first-generation followers to the path? I believe it is then necessary to have a definitive knowledge of what our forebears went through after they were saved and poured themselves into engaging in salvation work to express their indebtedness and make changes in their personal causality that helped make us who we are today.”

Rev. Kita concluded his sermon, saying: “I’d like us living in the present age to learn from Izo’s firm single-hearted conviction in God and in Oyasama’s teachings as well as his way of life that was in accord with Oyasama’s intention and was based on the teachings as we go about fulfilling our tasks dedicated to the cause of single-hearted salvation.”