The Joyous Life Lecture, sponsored by Tenrikyo Overseas Department, was held in Australia and the Philippines from the end of August to the beginning of September. 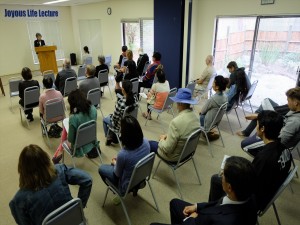 In Australia, the lecture was held at six venues in five regions, such as Brisbane and Casuarina, drawing a total of 109 participants including 42 non-followers. The lecturer was Mrs. Masako Okui, wife of the former head of Tenrikyo Mission New York Center. On August 29 the lecture was given at Tenrikyo Oceania Centre, where the audience included three people who had been invited by a follower who had, despite a life-threatening illness, kept trying to bring as many people as possible to the event. The centre has been encouraging followers to make the most of the lecture to achieve one of their pre-anniversary activity objectives, namely to bring a total of 350 people on pilgrimages to Jiba from the Oceania region. 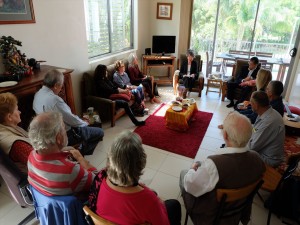 In the Philippines, the lecture was delivered at four venues in Metro Manila and Santa Rosa and attended by a total of 115 people including 51 non-followers. The lecturer was Rev. Masaharu Matsuda, head of Tenrikyo Mission Center in Singapore. Rev. Makoto Hamada, head of Tenrikyo Mission Center in the Philippines, said: “There are increasing numbers of followers who take part in preparing for the Joyous Life Lecture, through which they proactively spread the teachings. I would like to continue holding the lecture as one of our core activities in the year of the 130th Anniversary of Oyasama.”