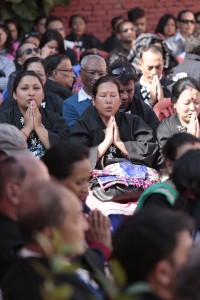 On November 12, the Shinbashira, his wife, and Successor-Designate Daisuke Nakayama attended the service commemorating the 50th anniversary of Tenrikyo Nepal Renrakusho in Kathmandu. The commemorative service drew some 250 people not only from within the Nepalese capital, Kathmandu, but also from the second city, Pokhara, which is 140 kilometers (87 mi.) away.

The path in Nepal can be traced back to the year 1958, when Mr. Ram Krishna Varma became a student of the Japanese Language Program at Tenri University on the recommendation of the second Shinbashira, Shozen Nakayama. In 1966, Rev. Ryoji Omukai, the first person to be dispatched by Tenrikyo Church Headquarters to the Asian continent after World War II ended in 1945, enshrined a symbol of worship in the home of Mr. Varmaʼs elder brother—an event that marked the beginning of Tenrikyo Nepal Renrakusho, which is Tenrikyo’s regional center in Kathmandu. Since then, this center has been carrying out social welfare activities and Japanese language teaching programs as well as providing guidance for local followers. Rev. Omukai continued to lead the center until 1993, when he was succeeded by Rev. Shichiro Soma, who, in turn, was succeeded in 2004 by Rev. Yoshiharu Kamimura, the current center head. At present, Tenrikyo has four fellowships as well as 336 Yoboku and many other followers in Nepal.

The 50th anniversary comes at a time when the followers have been conducting relief and support activities since the powerful 7.8-magnitude earthquake struck Kathmandu and surrounding areas on April 25 last year, killing about 9,000 people. The disaster had occurred as the followers were preparing for the 130th Anniversary of Oyasama by focusing on salvation work under the slogan “Let all of us who are Yoboku administer the Sazuke, the Divine Grant, as many times as possible.” In the aftermath of the quake, Rev. Kamimura took the initiative to organize a Salvation Work Corps mainly comprising members of the local Tenrikyo community in order to provide relief and support for affected people. The activities of the corps are not limited to material aid but ultimately aimed at paving the way for salvation work. The corps has already been dispatched over 300 times.

On the morning of the 12th, followers began arriving at Nepal Renrakusho at around 7:00 a.m., three hours before the service commenced. At 10:00 a.m., the Shinbashira, his wife, and Successor-Designate Daisuke Nakayama entered the worship hall in a formal atmosphere. After paying respects to God the Parent, Oyasama, and the Mitama-sama in unison with the Shinbashira, Rev. Kamimura read the service prayer in Nepali and Japanese, expressing appreciation for God the Parentʼs blessings that had guided the center since its establishment.

Rev. Kamimura continued: “On this precious day, we, followers of the path in Nepal, reaffirm our resolve to engage in hinokishin and take ever more powerful strides in advancing world salvation in unity of mind and with our minds settled in single-heartedness with God, so that we can respond to Your blessings that allow us to savor great joy today.”

The Shinbashira then took the podium to deliver his address. After touching upon God the Parentʼs desire to save all people in the world and guide them to the Joyous Life and upon Oyasamaʼs fifty-year Divine Model of the Joyous Life, he pointed out, “What we first need to settle in our mind in following the path is the basic teaching that ‘the body is a thing lent by God, a thing borrowed, the mind alone being the truth of oneself.ʼ”

He went on to say, “When we ponder over the profound parental love out of which God the Parent endowed us with the freedom of mind to enable us to savor a life filled with joy, a sense of responsibility spontaneously arises for using the body, which we are borrowing from God, as well as the mind, which God has given us as our own, in such a way as to live the Joyous Life.”

He then mentioned: “Our faith in the path starts with not only feeling gratitude at being able to receive the unlimited blessings of God the Parent but also offering our thanks in return. It is vital in this regard to ponder over how we can express our thanks for God’s blessings and to translate the fruits of our pondering into action in our daily lives. Such is the daily attitude of mind we should maintain as followers of the path.”

Looking back to 1966 when the center had its beginnings, the Shinbashira also stated that it was through the sincere efforts of all those who had practiced their faith here that the path in Nepal had gradually grown to what it was now. He concluded by saying, “It is my hope that you will make the 50th anniversary a springboard for further advancing your spiritual growth and the development of the path in Nepal.” 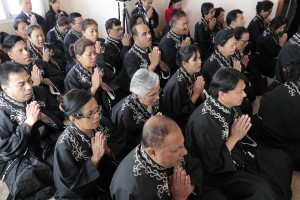 The seated service then took place with the Shinbashira as the core, followed by the performance of the Dance with Hand Movements, while the congregation joined in singing the Mikagura-uta, The Songs for the Service, in Japanese. Afterward, lunch was served in the courtyard of the mission center, and in the evening a commemorative reception was held in a hotel located in the city.

Reflecting upon the past years and looking to the future, Rev. Kamimura spoke on behalf of all followers of the path in Nepal, saying, “In the season of the 130th Anniversary of Oyasama and the 50th anniversary of Tenrikyo Nepal Renrakusho, those of us who are Yoboku and followers of the path in Nepal have, I am sure, heightened our awareness of performing the service and administering the Sazuke—which are the most important manifestations of our practice of faith. We would like to continue to carry out the relief and support activities in and around the devastated areas. By doing so, we hope to impart a spirit of mutual help to more and more people in Nepal and build momentum for salvation.”

During their trip, the guests of honor also visited three fellowships in Nepal on the 11th, Calcutta Church in India on the 9th, and Tenrikyo Mission Center and two mission stations in Thailand on the 14th.